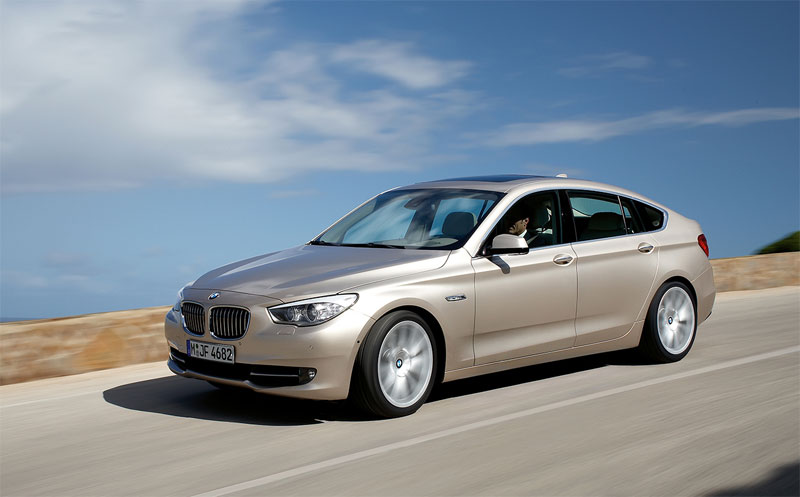 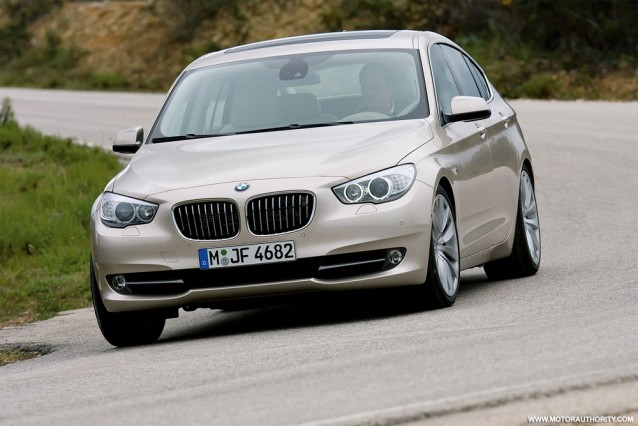 Alongside the first drive of the 2010 BMW X6 M this week, BMW gave the attending press, including TheCarConnection, the opportunity of a ride in the 2010 BMW 550i GT. Even though we weren’t allowed to photograph the cars due to their not-quite-production status, we can bring you our first impressions from the passenger seat.

Held at BMW’s Performance Driving School, the test ride involved only a brief acceleration to highway speed with long, banked sweepers at each end of a long straight section, though over several laps in different seating positions, we got a good initial feel for what the 550i GT is like.

It’s a quiet ride except for a bit of wind noise, and though visibility is poor out the rear of the Gran Turismo, BMW supplements the naked eye with 7 bionic ones, with cameras that look forward, backward and side to side to make it easier to drive, park and maneuver through traffic.

Slotting between the 5-Series sedan and 7-Series in rear-seat leg room the 5-Series GT will allow four adults to sit in the cabin with ease, and when equipped with the four-seat configuration, with as much or more comfort in the rear seats as in the front.

It may look a lot like the X6, but the 2010 BMW 5-Series Gran Turismo's interior is more 7-Series, as is passenger room, though it’s still a 5-Series at heart. With a 407-horsepower, 4.4-liter V-8 under the hood, it’s a solid performer too, picking up speed easily. Active dampers and BMW-tuned suspension help it take that speed through the turns, too, while huge brakes drew us back to surface-street speed with ease.

Handling seems neutral from the passenger seat, thanks in part to the 50/50 weight distribution. Even when grip threatened to run short, the car just remained balanced and stable as Jim Clark, the Performance Driving School’s head instructor, took us around the closed course.

In order to deliver both the ease of access of a trunk and the large-item capability of a hatch, BMW has developed a unique two-stage liftgate that closes at the touch of a button around the uniquely re-configurable rear seat area that features an adjustable cargo/passenger area divider that allows for more cabin room or more cargo area as need arises.

We’re still not settled on what we think of the 5-Series GT’s looks, though judging by the reactions of others, it’s a love-it or leave-it design for many. There are times when it looks a bit out of proportion, front-to-rear, but it’s a coherent package that presents well in the flesh and alongside the rest of BMW’s lineup.

We'll have more later this year from the 2009 Frankfurt auto show. Until then, get all the information you need including dozens of high-resolution photos over on our 2010 BMW 5-Series page.