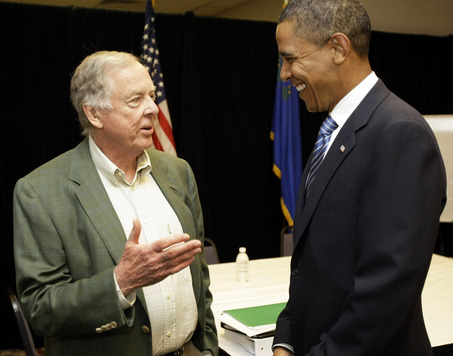 Oil baron-turned-clean tech tycoon T. Boone Pickens has been spending lots of time in D.C. these days, pushing for a variety of changes in U.S. energy policy. Yesterday he proved successful on one of those initiatives when Senate Majority Leader Harry Reid (D-NV), joined Senators Orrin Hatch (R-UT) and Robert Menendez (D-NJ) unveiled a bill that would encourage the development of natural gas engines and infrastructure, and boost tax credits for buying vehicles that run on natural gas.

The legislation--called S.1408, or NAT-GAS for short--offers a range of benefits to consumers and developers. Most notable among them: an increase in the tax credit buyers would receive for purchasing vehicles that run on natural gas. That credit is currently set at $5,000, but the new legislation would boost that to $12,500. The bill also includes a provision to deploy more filling stations for natural gas-powered vehicles.

What effect this might have on U.S. consumers and automakers remains to be seen. The Honda Civic GX is the only car offered to American drivers that runs on compressed natural gas (CNG), and at around 1,700 units sold this model year, it's not what one would call a big mover. In fact, there are only about 142,000 CNG vehicles in the U.S.--a mere fraction of the 10 million to be found on roads around the world.

It was suggested that the legislation should include a provision forcing GM to devote more attention to CNG vehicles--which could, in theory, happen, since the U.S. currently owns 60% of the company. However, the suggestion didn't gain much traction. For its part, GM has called natural gas "an enticing alternative"--which probably translates as, "that's nice, dear. Now run along and let the adults make cars."

That said, there are a few vehicles that could see a "win" from this legislation--namely large vehicles like city buses and big rigs. About 20% of the nation's public buses are powered by CNG, which runs significantly cleaner than both gasoline and diesel, so more funding for CNG development could reduce pollution in cities. As far as 18-wheelers are concerned, Pickens's goal is to see 1 million of them--out of approximately 6.5 million on the highway--running on CNG within five years. We'll see.