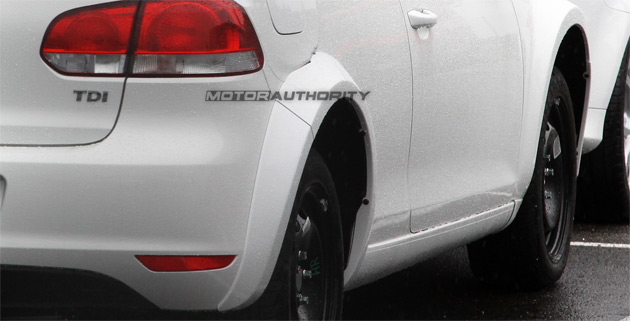 The 2011 Audi A3 is on track for a world debut late next year, and the first test mules have been spotted by spy photographers over at MotorAuthority.

The new hatchback's development was pushed back so that Audi engineers could work on new models like a proposed A1 city car and a new Q3 crossover slotted beneath the new 2009 Audi Q5 ute.

When it arrives, the A3 will return in three- and five-door form, at first. Later Audi is expected to add more models to the range, including a Cabriolet model, a Sportback wagon, and possibly a four-door sedan with coupe-like styling. Audi's expanding the lineup to better compete with the likes of the BMW 1-Series and the upcoming Mercedes A-Class and B-Class.

The new A3 will once again share its running gear with the Volkswagen Golf, but it will grow wider and a bit longer, as the spy photos over on MotorAuthority indicate.

Engines for the world will span from small four-cylinder gas and diesel engines, to a turbocharged 2.0-liter four with 211 horsepower--the most likely powertrain for U.S. versions, which probably won't arrive in America until 2012.