What Would Google Do (If It Built A Car)? 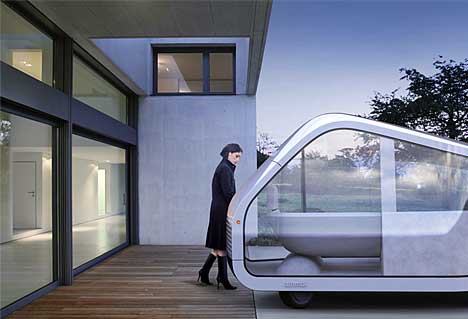 "What would Google do?" is not only a meme in media theory but the title of a Jeff Jarvis book, where he uses the question as shorthand for looking at old problems in new ways.

Now Mike and Maaike, the pair of designers who created Google's G1 phone (the first based on its Android software), have taken a crack at another old problem: What should the car of the future look like?

Their answer is something like a glass-walled seating area, electrically driven, on four hidden wheels. And, oh yes, it's autonomous--it drives itself--hence its name: the Autonomobile.

In their blog post on the project, the pair is clearly not enamored of the auto industry as it stands today: Today's car industry is brainwashed by its own car culture, with its obsession for speed, styling and fantasy.

So the duo redefine "performance" as the ability to transport passengers, or riders, without the need for driving at all. The experience, in their words:

Summoned by phone, your ATNMBL arrives. You enter from the curb side through an electric glass sliding door into a standing-height entryway. Upon entering, you are presented with a simple question: "Where can I take you?" There is no steering wheel, brake pedal or drivers seat.

Hence, they say, the vehicle should be:

... designed from the inside out with elements influenced by architecture. It should offer living comfort, views, conversations, and social connectedness. Unencumbered by driving, the new vehicle should be a space for living.

Reminds us a bit of Project Puma, the two-wheeled "Personal Urban Mobility and Accessibility" concept introduced this spring by the partnership of General Motors and Segway, with autonomous driving bolted on--a concept hinted at by Larry Burns, GM's R&D chief.

One intriguing nugget that came out of the Puma press event: Younger people feel driving distracts from more useful tasks, like texting.

Perhaps an autonomous electric vehicle is a lot closer to the future than old motorheads would like to believe?

UPDATE: See even more info on Mike and Maaike's site. 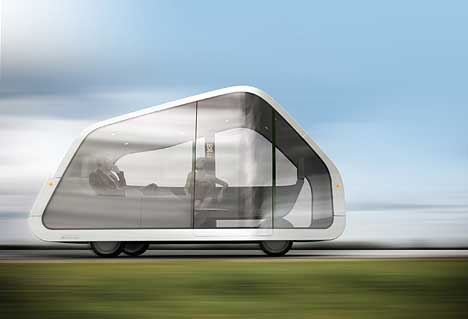 [Core77 and Dezeen via Fast Company]