Dirty Dozen: The Most Awesomely Craptastic Car Commercials Ever 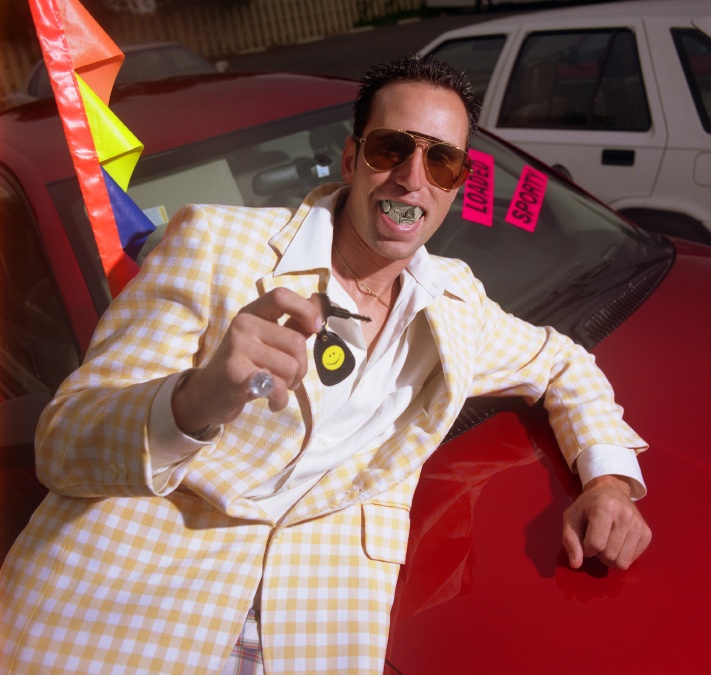 Yep, the economy's in the toilet and headed further south--where that final destination is, we can only guess. (Tierra del Fuego? Tampa?)

Everyone's getting desperate--here at TCC we're stopping all deliveries of Costco cheese crackers --but car dealers are the worst off, so far as we can tell. From giving away free schwag like oil changes and extended warranties, the truly desperate car dealers out there are doing everything they can to move sheetmetal off the lots.

That includes lots of advertising. Say what you will, but the niche of local car ads on TV is one of the most, uh, creative. Talking badgers. Rapping genies. Horrifically low-budget knockoffs of Joe Pesci movies. It's a subgenre that can make you laugh and puke all at the same time. Just like any script with Roger Ebert attached.

With Imodium in hand, we scoured YouTube for the most desperate car ads of all time. We think we nailed it, somewhere between the "butt in the car" jam found below and the wretched Spike Lee Jaguar X-Type that was so silly and so not Do the Right Thing, we couldn't even include it here.

For your mostly work-safe fun today, here are some of the worst, most desperate car ads we found:

It's an auto price fight at Hartford Toyota. Couldn't these guys be a little more UFC? Leila Ali would rope these dopes with one glove.

From Auto Connection in Colorado--hey, you know, there's such a thing as trademarks.

This one's a little plotty, but the wardrobe and thematic motifs are clearly No Country for Old Men. Or Twins:

Here we present Dave Campo, used car "evangelist"--a hyperreal blend of the stereotypical Silicon Valley "evangelist" as much as he's a rogue Baptist church preacher hopped up on adrenalin.

Hip hop rules. Doesn't it? It still does. Not sure how that applies here.

Butt In The Car. You can't put it any better. Don't even try.


Nothing to do with that Apple. Nothing. Except the intuitive user interface, and execs wearing women's clothes:


Okay, this one's for car insurance. So what? Isn't it fromage facile of the highest order?


Holler Mitsubishi: It's not just a name, it's an ethos. You'd scream too if you had Monteros to unload:


Again with the hip hop, which descends here on Pontiac--just a few years too late.


MagicHugs are offered, but we didn't accept. (Warning: fake commercial).


TDM Auto Sales: The commercial's anything but tedium, despite the assonance.

Badgers: good for sports mascots, but for car sales? Don't they eat the wood trim?


And one truly great car dealer ad. We all need a trunk monkey, don't we?