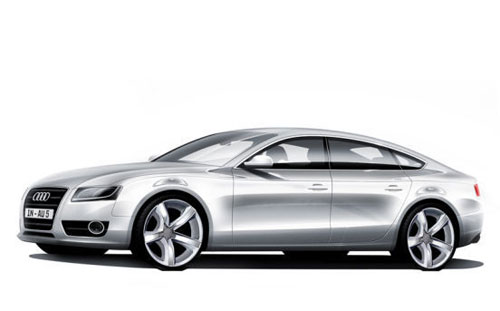 Four-door coupes are still a relatively new segment, especially in the mainstream large luxury arena, which the Mercedes-Benz CLS essentially has to itself for now. But Audi has a rival in the works, a sleek yet spacious four-door cruiser called the A7, and it's due in late 2010.

Recent heavy investments in the Neckarsulm plant tip Audi's intent to take the car to production. Cars are expected to start rolling off the assembly line late in 2010, according to a report by Auto Motor und Sport. U.S. buyers can expect to see it on showroom floors early in 2011.

A wide range of powertrains will be offered in the A7, but things will get really interesting for the sporty and hardcore (respectively) S7 and RS7 variants. The S7 is expected to arrive in 2011, while the RS7 will have a two-year lead time before it debuts in 2013.

Everything from diesel-electric hybrids to 600-horsepower V-10s will be found under the hood of the A7 range. The hybrid powertrain used in the A7 is expected to show up first in the Q5 crossover.

A pair of V-6s form the meat and potatoes portion of the lineup, including a 204-horsepower 2.8-liter engine as the base model, with a 3.0-liter supercharged engine rated at 300-horsepower as the first upgrade.

Both six-speed manual and eight-speed automatic gearboxes will be available in the lower-spec models, while a seven-speed dual-clutch unit is also planned for the performance variants.