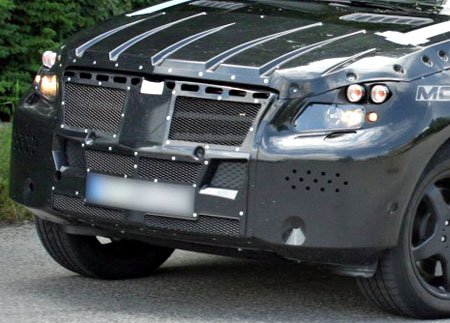 The 2012 Mercedes-Benz M-Class has been on the drawing boards for a while--and now, the German automaker is running tests on prototypes spotted by the spy photographers over at Motor Authority.

The new ML-Class sport-ute is due to arrive in 2011 as a 2012 model. These first photos of test mules show what could be a slightly shorter body, on an unchanged wheelbase. The ML-Class is expected to remain a five-seater, while Mercedes continues to offer a seven-passenger GL-Class ute and continues to debate the future of its six-passenger R-Class crossover.

All three vehicles are now built in Alabama, and share most of their powertrains. For the next generation of U.S.-built Benzes, those engines could include everything from V-6 and V-8 gas engines, to diesels, to hybrids, to diesel hybrids. The gas engines should carry over from today: a 268-hp 3.5-liter V-8, a 5.5-liter and a 382-hp V-8 may be topped by a twin-turbo, 570-horsepower AMG ML-Class.

As for green versions, diesel and hybrid versions will carry on. A plug-in hybrid based on the existing ML450's gas-electric powertrain has even been rumored: plug-in technology teamed with a twin-turbo version of the direct-injection Benz 3.5-liter V-6 might give the SUV an electric-only operating range of 30 miles to use before the gas engine kicks in to charge its batteries.

The ML450 Hybrid of today and its nickel-metal hydride batteries, meanwhile, are expected to give way to lithium-ion batteries like those in the new S400 Hybrid.