Connect with our dealer and finance partners through our site and ask for details regarding their at-home car buying services.
OK
HomeNewsFrankfurt Auto Show 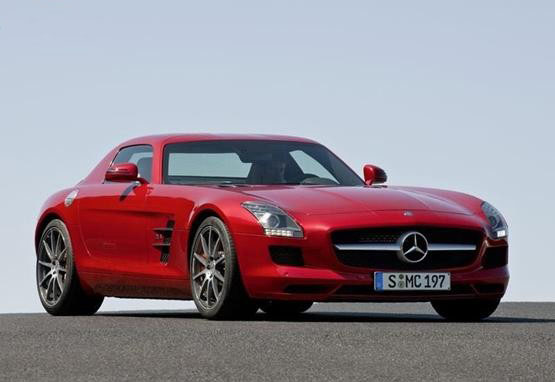 It's been unveiled at the 2009 Frankfurt auto show, and in a few days, High Gear Media heads to Monterey and Laguna Seca to join up with the 2010 Mercedes-Benz SLS AMG for our first drive.

The SLS car is the successor to the current Benz SLR roadster and former coupe, but this time around, the German automaker's put an emphasis on low weight to go with astonishing power, as it hunts down some of the track-ready luster that graces most Ferraris and Lamborghinis. The new SLS AMG features a curb weight of 3,571 pounds thanks to an aluminum spaceframe, which also provides an almost perfect front-to-rear weight distribution of 48:52 percent.

Inside the lightweight body, the SLS AMG offers up a single powertrain, an evolution of today's big AMG V-8.That 6.2-liter mill produces a healthy 571 horsepower, along with 479 pound-feet of torque. Through a 7-speed dual-clutch transmission, and rear-wheel drive, the SLS AMG will accelerate from rest to 62 mph in a claimed 3.8 seconds--Corvette ZR1 territory but shy of the stunning 3.3-second times turned in by the Nissan GT-R and Porsche 911 Turbo. A Race Start function controls power from launch to preserve driveline parts. A top speed of 196 mph is also claimed, but a push to 200 mph in final development wouldn't come as a surprise, as the new gullwing supercar is expected to be the most capable Mercedes ever.

That gullwing body--a heritage cue from the legendary Gullwings of the 1950s--is a relatively long shape, with a stretched nose to accommodate the big V-8 and a short deck featuring a configurable spoiler for high-speed stability. The SLS AMG is 183 inches long and sports a wheelbase of 105.5 inches. Carbon-ceramic brakes with 15.4-inch front discs and 14.2-inch rear discs are teamed with 19-inch wheels and tires for stopping capability equal to the task. 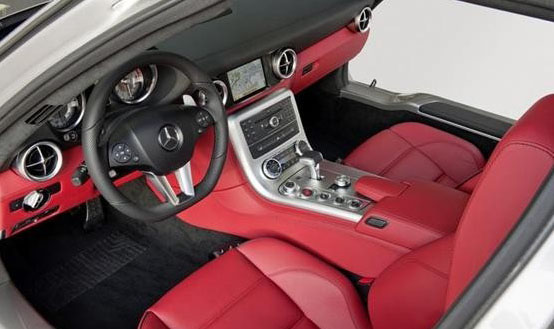 Styling is dominated by a new front-end treatment that evolves the current SL/SLK-Class shapes. Inside, the dash is similar to that in the current SLR, but with richer finishes--one of the chief complaints on the SLR centered on its somewhat pedestrian cabin. The COMAND controller figures into the center console design, and will run climate and entertainment systems. Mercedes will fit the cabin with leather, aluminum and chrome trim, and optionally, carbon-fiber trim, too.

The two-seat SLS AMG will be a limited production vehicle, with 3000 to 5000 units produced in all.

We'll be reporting live beginning Sunday, November 1, from our first drive in California. In the meantime, TheCarConnection.com has more photos at our 2010 Mercedes-Benz SLS AMG page, and even more details and video over at MotorAuthority's Benz SLS pages. Stay tuned. 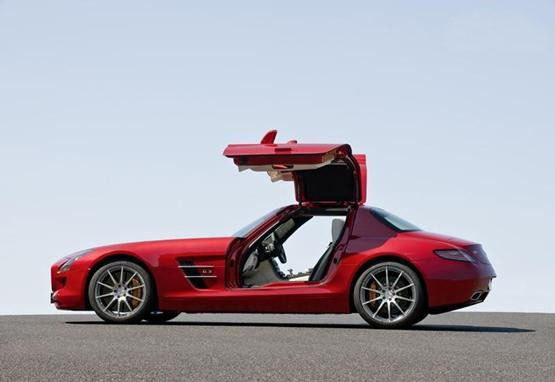 Cruise the High Gear Media network! TheCarConnection for experts reviews of every new vehicle; MotorAuthority for luxury and performance-car news, reviews, and spy shots; GreenCarReports for news and reviews of the latest earth-friendly cars; CelebsandCars to see how the stars roll.