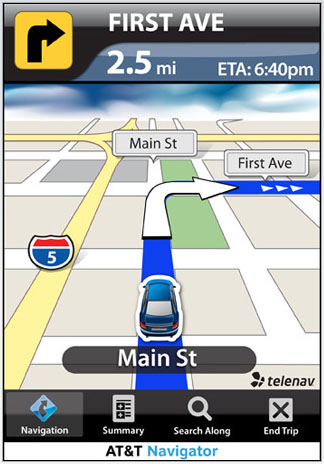 GPS navigation comes in many flavors for drivers: there are standalone units from makers like Garmin and TomTom,  operater-assisted navigation instructions from GM's OnStar, and navigation programmed into cell phones for on-the-fly directions that depend on cell phone connections to update data and maps.

AT&T's stepping into the latter game--and hoping to displace the other types of GPS--with its new Navigator service, available on the Apple iPhone 3G and 3GS, as well as other phones sold by the company.

AT&T asks you to access their application through the iTunes App Store, if you're an iPhone user. I'm a new 3GS owner, so I signed up for the plan. Then, I discovered if you went through the AT&T site, you get one month of free service--a quick call to AT&T resolved the initial charge.

The installation takes a quick sync to load on the iPhone. Then it's easy--and the app itself loads quickly. A warning screen reminds you not to use the service in motion, but I was able to make basic changes while driving. Not a good idea, but a test.

The primary screen lets you set destinations, search them, view maps and traffic options, and see extras. On the destinations screen, you can choose from favorites or recents, or by four types of destinations: businesses, addresses, airports or intersections. You can also call destinations from a sub-navigation screen that allows you to type in destinations directly.

The maps screen shows your location and route, if chosen. The maps are in 2D or 3D (shown here). It's all fairly conventional stuff, save for the End Trip button on this screen--other GPS units from the aftermarket or from manufacturers make you go on a fishing expedition to find the cancel trip function. (The Ford Taurus SHO I'm driving? Three screens away, under a navigation element you'd never expect.)

You can choose route preferences "("fast," "short", etc.) and you can plot out a trip from 10 million points of interest, like most GPS units. AT&T WiFi hotspots are prime among these--and since they're usually at Starbucks, it's a bonus.

The AT&T system functions about as well as most low- and mid-priced navigation units, with some of the same issues with sound quality and correction speed. It's incredibly simple to use, even for first-time GPS users. All the typical functions are easy to access, and the iPhone's interface magic has influenced this app's design heavily.

Most of the problems in using the system are physical. To use it in the car, a window kit from Griffin ($29) is a necessity. But then you have to wonder about plugging into music; in the Jaguar XFR I also tested this week, a windshield mount left the music in the iPhone untapped, since the iPhone connection port lives in the Jag's console. You could plug in via AUX jacks or stereo Bluetooth, but the trifecta of power cables, window mounts and USB/aux connections will leave a tangled mess, not to mention a series of discarded iPhone cases that simply don't fit the mission.

Voice quality from the system could be improved. The iPhone 3GS is the first of its kind from Apple to talk back to you. The voice commands can be turned off, but I preferred to leave them on--with the volume turned down a bit. The iPhone's speakers just aren't good enough to deliver loud, clear commands. If you're using a Bluetooth headset, the instructions will play out over any call you're holding, and while the phone will mute music for incoming calls, other systems it interacts with--like Ford's SYNC -- will not control it to do so.

Correcting routing takes a bit of time. I made several U-turns to throw off the routing, and it took a pause at a gas station for the AT&T data stream to catch up with software. But traffic alerts are some of the handiest features. It scans route ahead and predicts how much of a delay you'll see, and offers one-button rerouting.

You can pre-load destinations and favorites via a separate Web site, NavPrePlan. That allows you to plot out errand runs and road trips to save time and fuel, but you can do the same on the phone itself.

The first improvement to the software should be keyword bookmarks. A one-tap search for "Starbucks" would duplicate apps like Where, which overlay search words with maps to create mini-directories for any destination. Imagine clicking a favorite in Tulsa, or Tustin, or Tampa, and getting the closest source of caffeine in any of them with one tap. (If that function already exists, it's uncharacteristically buried.) 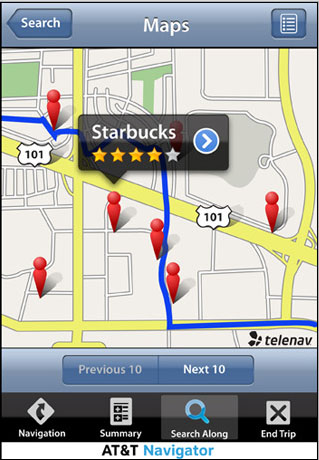 The new AT&T Navigation package for the iPhone is a strong replacement for inexpensive navigation systems. More expensive cars with integrated units will offer more features, but for the $20,000 sedan with no Bluetooth and no GPS, the iPhone app is a great solution.

It's not the AT&T navigation application that's a killer--it's the iPhone itself. The singular Apple device now plays music, keeps data, offers voice and WiFi connections, and with the latest functionality added on, it's a compelling choice for anyone who lives in the digital age.

At $9.99 a month, it's about 18 months before a standalone GPS unit begins to make more sense than the iPhone GPS--but even those standalone units require expensive map updates, get broken or stolen, and add to the cable and junk pile in your travel bag or purse.

The iPhone and AT&T Navigation setup should give buyers of Ford's SYNC system pause. Same goes for shoppers inclined toward the Hyundai/Kia version of SYNC that's on the way next year. With voice controls, music controls and now navigation, the latest iPhone is very nearly a SYNC replacement in itself. It's no wonder Ford's system doesn't cooperate totally with the AT&T setup.

GPS makers are convinced this type of navigation is the future. TomTom is preparing its own navigation software for the iPhone, in fact, to launch this summer. It too will likely carry monthly charges, with some of the spiffs of TomTom portables. Homer Simpson's voice could be on your phone in a mere month or two.

Bottom Line: The AT&T navigation system is worthwhile for casual GPS users who need a clear, quick set of directions--if more monthly charges on your cell-phone bill aren't a problem.