Connect with our dealer and finance partners through our site and ask for details regarding their at-home car buying services.
OK
HomeNewsCoupes 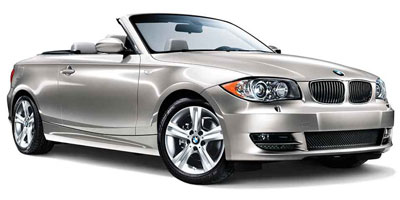 While most open-air driving enthusiast might dismiss the lesser 128i Convertible in favor of the 135i, the 230-horsepower, 3.0-liter in-line six-cylinder engine powers the 2009 BMW 128i Convertible with enough gusto to rip off 0-60 times of less than seven seconds. TheCarConnection.com's test car had the optional Sportronic automatic transmission; we're normally manual-gearbox fans, and BMW makes a good one, but the character of this automatic felt especially well suited to the engine and the car. In Sport mode, without worrying about manual shifts, it was responsive for spirited driving, yet in normal mode it would shift quite early, the smooth engine happily complying. There's much to love in the 128i's engine; power builds neatly all the way to its redline, it feels as smooth as ever, and it of course sounds great.

This editor enjoyed the raw thrust and omnipresent torque of the 306-hp 135i in a previous drive, but the 128i will ultimately be the best choice for those who just want to enjoy the driving experience in a real world with congestion and highway patrols.

The 2009 BMW 128i Convertible has a spring in its step around town and in tight corners; it quite simply feels lighter and more nimble than other convertibles we've recently driven. Surprisingly, the 128's personality changes on the highway, where it settles in and holds the road like a little tank on the highway—a stealth highway cruiser. Its roadholding is phenomenal, and as long as you have the top up there's only a tiny bit more road noise from outside to remind you that you're not in a true coupe. The suspension is firm, and the ride was even a little hoppy at times, yet it soaked up the largest heaves. Our test 128i Convertible had a little bit of cowl shake, such that over a series of sharp, jiggly bumps we noticed the mirror and windshield header moving more than our seats.

Wind buffeting is pretty impressive in the 128i; top down, it was notably less turbulent than in the Z4 Roadster that TheCarConnection.com drove a month or so ago. The soft top fit tightly, with absolutely no rainy-day leaks and no odd wind whistles. And the instrument panel is clean and simple, with no sign of iDrive.

Look back, any hopes of carrying passengers back there are quickly dashed. It's merely a small bench—more of a platform, actually. Adults just can't fit back there, and the backrest has a flat, pushed-forward contouring. Trunk space is ample and much better than most retractable hardtop designs, despite a rather small opening and the rather stiff action of the trunklid that makes it difficult to close with an armful of groceries.

There are few, if any, direct rivals to the 1-Series Convertible. The 3-Series and most of its peers have assumed retractable hardtop designs and taken on hundreds of pounds of additional weight, with some of them (like the new Infiniti G37 Convertible) weighing in at more than 4,000 pounds. For comparison, the 128i Convertible weighs a little less, at around 3,500 pounds. The Volkswagen Eos is closer to the 1-Series' size and weight, but with front wheel drive and softer tuning it's much more of a cruiser. That leaves an unlikely rival, but the one left standing: the 2010 Ford Mustang Convertible. Price-wise, the Mustang V-6 undercuts the 128i Convertible by a few grand, while the Mustang GT (V-8) offers up comparable power to the 135i for less money. For more, you might be interested in this comparison of the 2010 Ford Mustang vs. the 2009 BMW 128i. 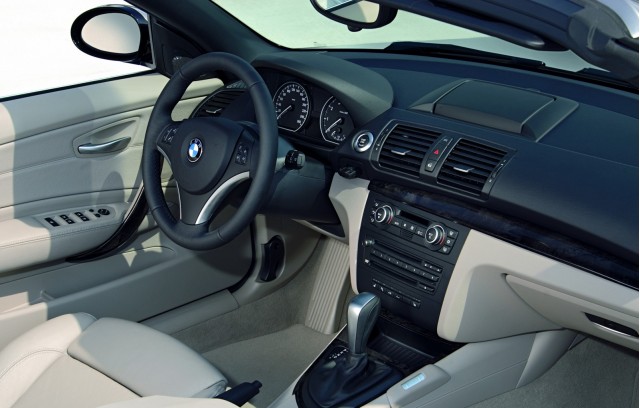 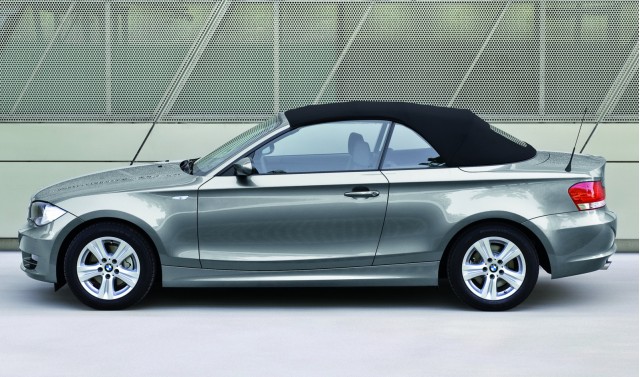 You'll be able to leave the lot in a 128i Convertible for as little as $30,225, but some of the 1-Series options are tantalizing—and the focus on offering lux upgrades in packages and tech features piecemeal can rapidly drive up the sticker price. We do recommend stepping up to the premium system in the 1-Series, at $875; the $900 xenon adaptive headlamps also include auto-leveling and cornering lights and are worth your while for nighttime vision. Rear Park Distance Control might be another useful option for the 128i, at just $350, because with the top up sideways and rearward visibility is pretty limited. One big positive to the basic 128i is that the instrument panel is clean and simple, with no sign of iDrive.

Where it gets a little more frustrating is with some of the little tech features that are standard on lesser cars but optional on the 1-Series. An iPod and USB adapter costs $400, and Sirius Satellite Radio will do you $540. Getting smartphone integration actually costs $1,300, because the $150 option requires the iPod/USB adapter plus the $750 BMW Assist system.

The 2009 BMW 1-Series is a good choice if you can maintain some discipline in checking those option boxes. Though spending more than $50k on a loaded 135i Convertible doesn't make a lot of sense as it opens the playing field to a much richer mix of luxurious retractable hardtops (like BMW's own 3-Series), if you limit the options, the 128i Convertible is a compelling value with the mostly bygone BMW character that a lot of enthusiasts miss.