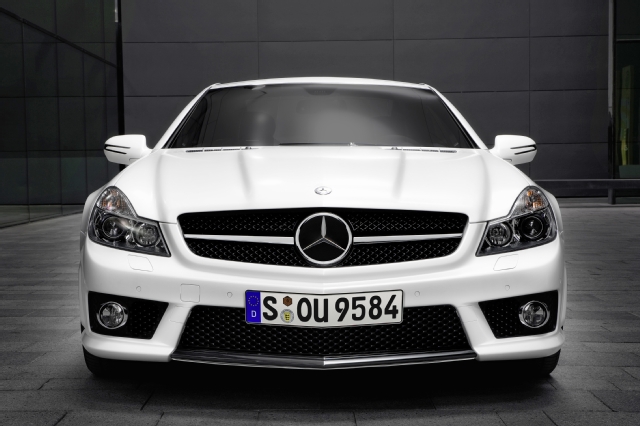 Sales of Luxury watches are down. Sales of luxury everything is down, including cars. But this past winter Mercedes bravely brought to market a blurring of both when it promised to sell 200 (worldwide; 63 in the U.S.) SL63 AMG IWC Edition cars. Here I’ll first dissect the name, then discuss its particular joys (of which, I promise you, there many).

The SL63, as the name implies, gets a 518-hp, 6.3-liter V-8, an engine developed from the ground up for AMG. According to the kids from Affalterbach, Germany (where AMGs are birthed), there’s not a single part of the motor in common with the more “plebeian” V-8s in the rest of the Benz fleet.

More exclusive still is the IWC monicker, a nod to the “Grosser Ingenieur” (Great Engineer) wristwatch from Swiss maker IWC Schaffhausen that comes with purchase of each car.

But you don’t have to wear your watch every time you drive your $146,000 SL63 AMG for folks to know the distinction, because this car comes only in a unique, Mango Cashmere White, a matte paint job that you’ll either die for or think just looks strange. One thing it is, without question, is attention-getting. During tests I fielded questions from women, men, young, old—even children— wanting to know what made this paint so “weird,” “cool!” “haven’t seen that on Gran Turismo!” All of which made this tester wonder if it wouldn’t be a whole lot better to get your IWC in matte black—or more gorgeous, matte burnt cocoa, the color of the unanimously gobsmacked-over perforated leather seats. (AMG merely calls this hue “Exclusive Leather Brown” but trust me, burnt cocoa—rich, deep, luxuriant, maybe a hair sinful—is way more on it.)

The rest of the cabin is pretty darned fabulous as well, both in creature comforts and function. The latter, first: This is a hard-top convertible (top folds or deploys in 16 seconds), the likes of which are difficult to execute decently, let alone well. And I’m not even talking driving dynamics, about which, more below. Too many top-folders feel claustrophobic with the lid on and there’s nearly always poor aft visibility and of course trunk space is minimal. But top up or down, the SL63 doesn’t feel cramped, rear vision is well above average for the breed, and even for the lanky, the cabin feels roomy. The 12-way adjustable seats for both passengers feel sporty but not constricting, a trait that's quite uncommon for a few too many grand tourers. Also, both of these leather loungers are heated and cooled and feature such niceties as an active massage function (sounds goofy but feels dandy).

While I’m praising, kudos to the squared-off steering wheel which, aptly, lets your fingers tell you where on the wheel you’re gripping so that micro-fine adjustments in the car’s attitude are accurate, with little need for resetting course. Praise should also be awarded to the acoustical engineer who ingeniously devised the rear wind baffle that folds up neatly behind the front-seat headrests; many convertibles can grow cacophonous at highway speeds with all the swirl of air inside the cabin, but I tore up roads at 90-plus with the top down and could easily hear the excellent Harmon/Kardon sound system—as well as when my phone rang. ("I’ll get back to you; I’m having a little too much fun to talk just now, thanks.")

One cockpit wonder that feeds directly into the discussion of driving dynamics is the meaty, metallic paddle shifters that bracket the steering wheel and control the astounding, seven-speed MCT SpeedShift transmission. This clutchless drivetrain is splendid, rivaled only by Audi/VW/Porsche’s DSG in terms of accuracy, willingness to downshift quickly and accurately into a gear right near redline, and with reasonable smoothness. All of that’s important, because if you’re forced to go clutchless (especially at $145k) you’d better have all the advantages of shifting manually to go along with the convenience of not shifting at all during your crawl through traffic.

A few details on the gearbox. It features Comfort, Sport, Sport+ and Manual modes. The farther from Comfort, the faster the shift occurs, either up or down, and in Sport modes and beyond downshifts will selectively skip over gears, say from 7th to 5th gears as long as no harm will be done to the engine/transmission. In manual mode shifts occur as quickly as 1/100th of a second, and manual downshifts all feature rev matching, the action of which creates a breathtakingly badass snarl from the exhaust. Nobody near the car would presume you’re so comfortable and poised behind the wheel of this Benz.

Nor, it should be said, is this transmission, or any other aspect of the way AMG SL63 drives, sweat-inducing. Unlike the Aston Martin V-8 Vantage, a reasonable cross-shop vs. the SL63, the Benz feels poised, agile, but not explosive or tenacious (even though it can easily exhibit both traits at a moment's downshift). And despite the rapid upshifts of the engine screaming toward its 7,000rpm redline and the brutish roar from under the hood it’s easy to feel comfortable pushing the limits of the car, although to be honest there are very open few roads in this country where you could come anywhere close to testing those boundaries. As it is, 60mph arrives around redline in second gear (in 4.4 seconds, says AMG) and the top speed has been pushed back from 155mph to 186mph.

One important point: The AMG SL63 achieves a level of grace well beyond what you find from the stock SL. Not that the non-AMG is blue collar, but that car’s steering and handling can feel a tic heavy, whereas the SL63’s dynamics, steering, shifts and engine are truly in world-class GT territory, on par with the both the aforementioned Aston Martin, and a few Porsches we can think of. And unlike those machines the Benz is darn near placid when babied. The only thing that may be better? The forthcoming SL65 Black Series. 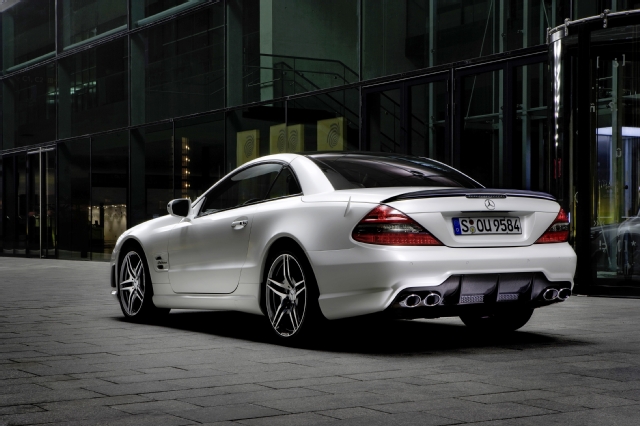 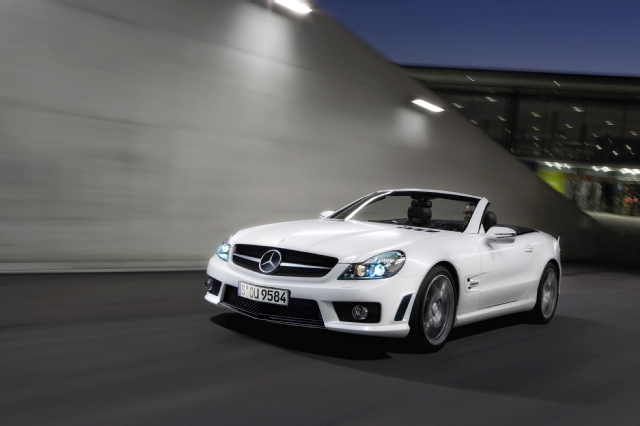 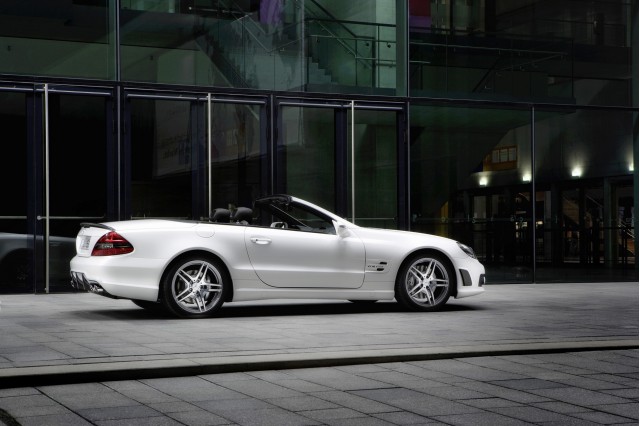