When Porsche introduces the 2011 Porsche Cayenne Hybrid late next year, its first-ever hybrid-electric vehicle may be the priciest hybrid on earth.

While a Porsche executive said pricing hasn't been finalized, according to the German Automobilwoche, the expected European price will be in the vicinity of 90,000 Euros--or $125,000 in US money.

That's considerably north of the $106,000 ticket for the 2009 Lexus LS600h, the top-of-the-line Lexus full-size hybrid sedan claimed to deliver V-12 performance from the combination of a V8 engine with Toyota's Hybrid Synergy Drive system.

It remains to be seen how the 2011 Porsche Cayenne Hybrid will be priced in the US, which is likely to be its largest market. Most European cars are better equipped and cost less in the US than at home.

The Cayenne Hybrid returns roughly 26 miles per gallon on the European test cycle. That's much better than the 14 mpg city / 20 mpg highway rating for the base 2009 Porsche Cayenne, which uses a 290-horsepower, 3.6-liter V6.

And it's much, much better than the rip-snorting 2009 Porsche Cayenne Turbo, with its 500-horsepower, twin-turbocharged V8. That hot-rod sport-ute is ranked at a miserable 12 mpg city / 19 mpg highway.

The 2011 Porsche Cayenne Hybrid will be fitted with an Audi direct-injected, supercharged 3.0-liter V6 engine rated at 333 horsepower. A 38-kilowatt (52-hp) electric motor is mounted between the engine and an 8-speed automatic. That motor offers 221 lb-ft of torque, two-thirds as much torque as the engine itself generates.

Unlike other hybrids, the system is tuned to give maximum electric assist not in city driving but at highway speeds.

Porsche claims all-electric running at speeds as high as 86 miles per hour, though the vehicle most likely can't accelerate to that speed from a stop using only electricity. The company also cites acceleration from 0 to 62 mph in 6.8 seconds, using both gasoline and electric power.

Porsche's second hybrid model will be a version of the 2010 Porsche Panamera, their first-ever four-door sedan, which was formally unveiled a few months ago and will go on sale by the end of the year. 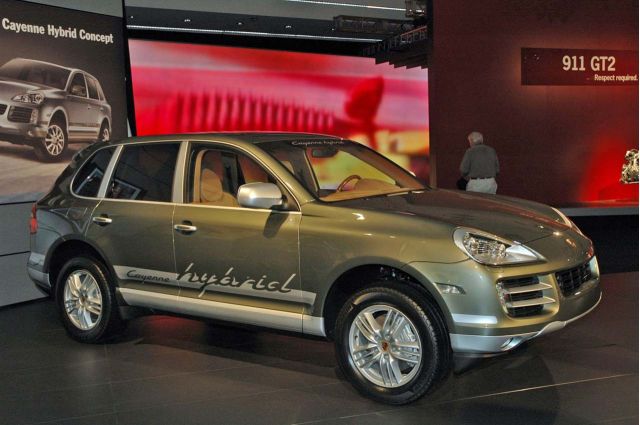