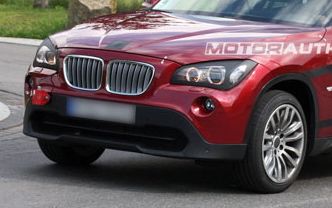 An official set of photos and specifications are due on July 2--but today the 2011 BMW X1 has been spotted in near production-ready form.

Spy photographers caught the new SUV undergoing testing prior to its world debut in media, and a real-world launch at the 2009 Frankfurt auto show later this year.

Motor Authority reports the new SUV bears halllmarks of other new BMWs like the 5-series GT and the 7-series sedan; designers have stuck closely to the lines of the Concept X1 showcased at last year’s 2008 Paris Auto Show.

Underneath its compact body, the 2011 X1 takes BMW 1-Series mechanicals and adds xDrive all-wheel drive. Some 3-Series parts are in the mix as well. Powertrains for U.S.-market X1 SUVs should includea 2.5-liter in-line six with 204 horsepower or a 3.0-liter in-line six with 230 hp. A diesel engine is a possibility for American shoppers in the near future.

BMW hasn't released pricing or other details, but with an estimated $30,000 base price, the German-built X1 won't be inexpensive.

Stay tuned in July for official details on the new 2011 X1.