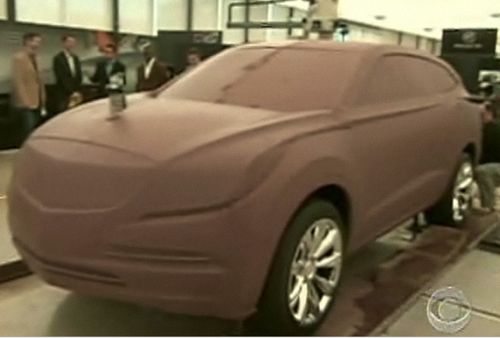 General Motors is pounding the airwaves with positive messages while it tries to discreetly machete its way through a Chapter 11 filing. Today's question--are they putting the 2012 Buick Enclave out there as a sex object, to distract from court proceedings with an old-fashioned lift of the kimono?

That's Jalopnik's guess, after they froze a frame of a CBS program that toured GM's design center with affable chief Ed Welburn. A clay model on display at Welburn's studios looks suspiciously Buick-like, down to the shield-shaped grille.

The clay model could very well be the 2012 Enclave, Jalopnik says. The timing is right, since the Enclave was new for 2007. And with a redesign coming roughly every five years, this new vehicle could be the next Enclave, built on a stretched version of the current crossover's "Lambda" platform.

The new version could grow in size to meet demands of the market in China, where Buick's a best-seller. And to our eyes, this clay model definitely adopts some of the flowing seven-seat lines of the 2010 Lincoln MKT.

We're sure GM has more future product details to trickle out over the next few months--stay tuned here as we patrol broadcast, dead-tree, social and other media for the latest.