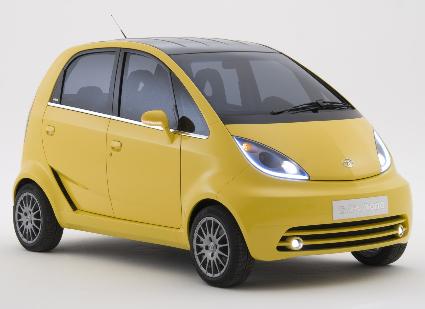 With a base model that starts around $2,500, the Tata Nano has been wildly popular since it went on pre-sale in India in April. As we mentioned a few weeks back, it's already sold over 200,000 units there, with another 600,000 buyers waiting in the wings. Given all that hoopla, how could Tata resist the allure of bringing such a moneymaker to the states? Answer: it couldn't.

According to Chairman Ratan Tata, the Tata Nano will launch in the U.S. by 2012--possibly as early as 2011. Besides preparing the car to meet American emissions and safety standards, Tata is also readying a range of options for American buyers, including diesel and electric powertrains. It's too early to discuss pricing, but it's safe to bet that the Nano will fall on the low, Yugo-ish end of the spectrum.

One major hurdle that Tata will have to jump before the launch: distribution. As the owner of both Jaguar and Land Rover, Tata could theoretically distribute through those dealerships. But while the thought of a Jaguar XJ and a Nano on the same lot is thoroughly amusing to us, the same can't be said for Stuart Schorr, spokesman for Jaguar Land Rover North America, who bluntly stated, "Tata will not use Jaguar Land Rover's distribution network and vice versa." So there.

Also problematic for Tata: production. Capacity in India currently tops out at 50,000 units per year, and although there are plans to expand that bandwidth significantly, doing so quickly--on multiple continents--will be no easy feat. For those of us on the outside, though, it'll probably be fun to watch.