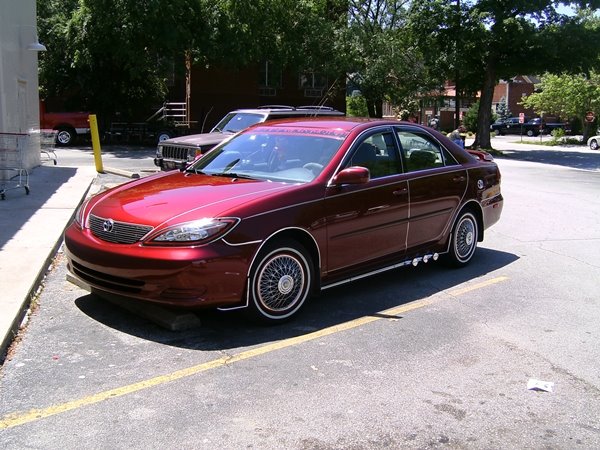 ♦  There's a lot of car bling on the market, but not everyone knows how to use it. We think the owner of this Toyota Camry did a pretty awesome job of walking the fine line between "80s futurism" and "chromed-out mid-life crisis". And hey: at least it gave gramps a weekend project. [Cardomain via Carscoop]

♦  Seems like everyone has an opinion about the GM bankruptcy--even Michael Moore, who's cooked up a nine-step plan to transform the General into a hulking mass of green goodliness. Knowing him, we thought there'd be 12 steps, but whatever. [TheDailyBeast]

♦  Speaking of GM: as if CEO Fritz Henderson didn't have enough to do, he's also got to monitor the GM weblog. Yesterday, the poor schmuck had to sift through--and respond to--comments from fans and haters alike. What kind of job is that? Oh, right: ours. [GMblogs]

♦  Jay Leno apparently can't get enough green in his car diet: on Sunday, he made an appearance with the EcoJet concept. There's not much driving footage in the clip, but the car looks like an interesting biodiesel ride. FYI, the video is almost as loud as the EcoJet itself, so watch the dial, cubicle buddies. [YouTube via Autoblog]

♦  Remember back in February when we told you about Yves Béhar's sweet "Mission One" electric motorcycle? Well, it's roaming the tracks. [Wired]

♦  It's E3 week in Los Angeles--that special time when videogame gurus and their weirdly rabid fans gorge themselves on Hot Pockets and talk about new stuff, like the latest entry in the Gran Turismo franchise, Gran Turismo 5. For which there happens to be a video. Sweet. [YouTube via MotorAuthority]