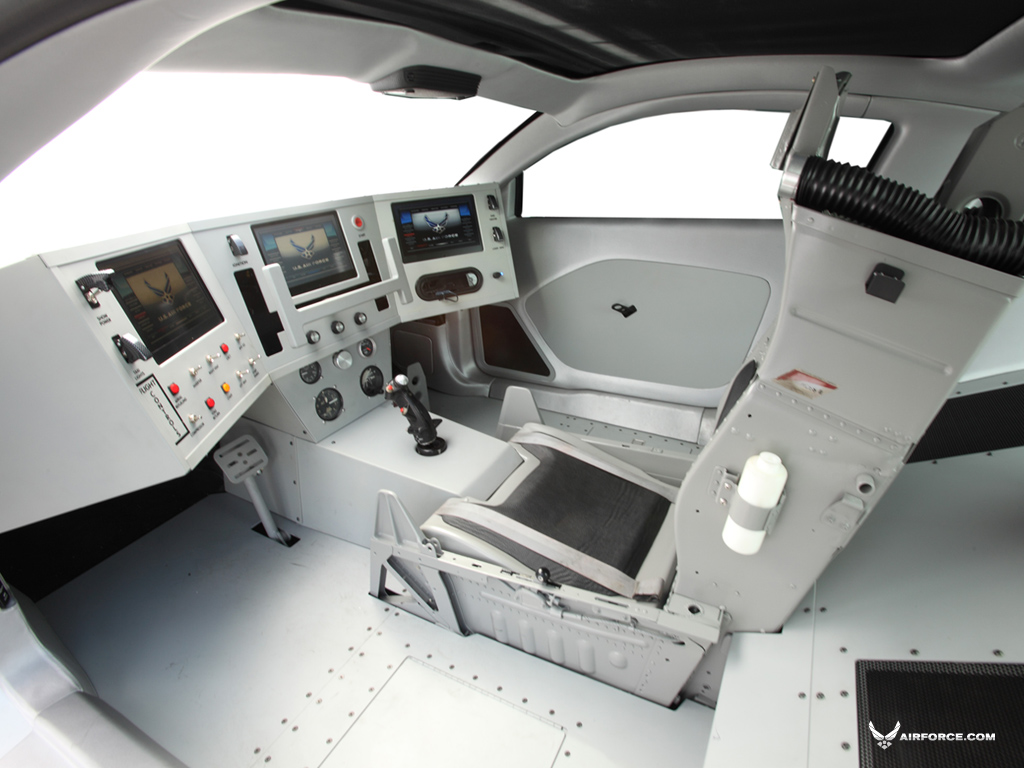 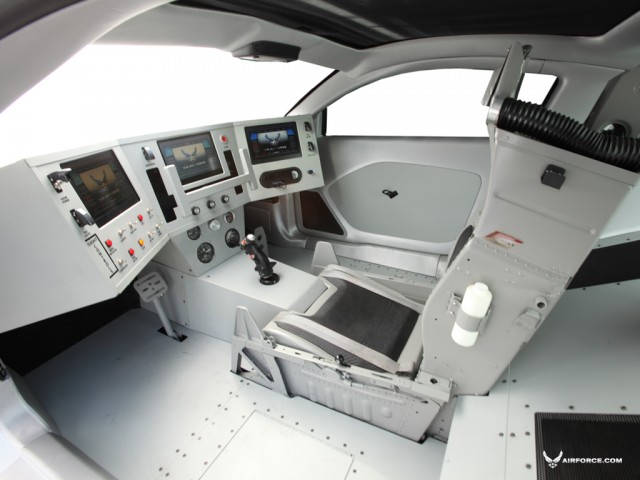 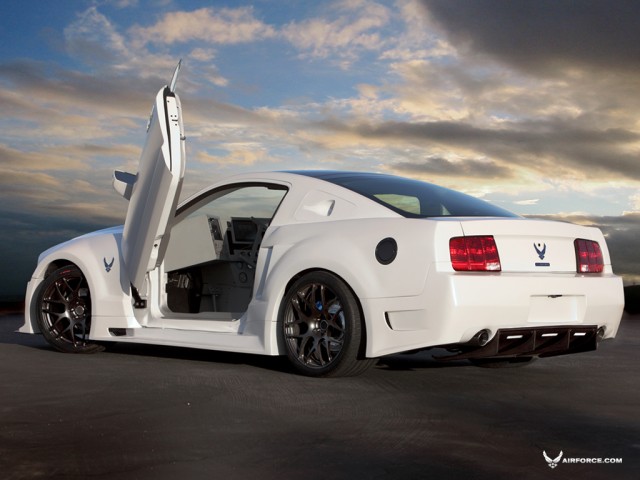 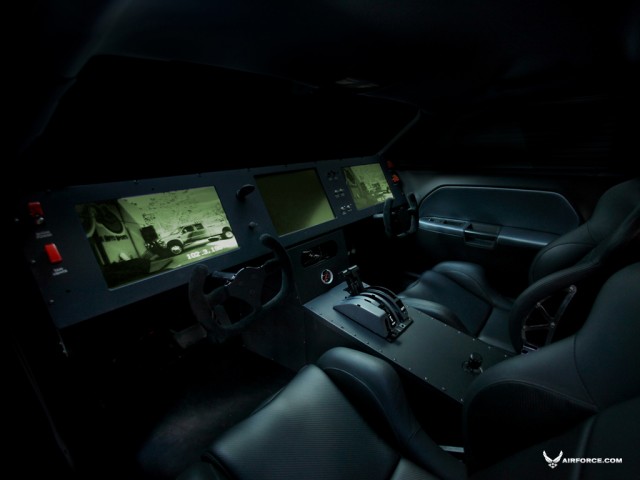 It's no secret that the U.S. military has had recruitment problems in recent years. As a result, each branch has been forced to hone its marketing skills and speak more persuasively to potential enlistees. The Air Force's new Project: Supercar campaign is a spectacular example of how that that savvy can be put into service.

In a nutshell, the USAF hired Galpin Auto Sports to transform a Ford Mustang and a Dodge Challenger into serious supercars. The goal: to draw young gearheads to Air Force recruitment events. The result: the "X-1" Mustang and the "Vapor" Challenger.

On the outside, both cars look vaguely similar to other souped-up rides, with scissor-doors, carbon fiber-trim, and other tuner-ish bling. On the inside, however, the Air Force influence becomes startlingly clear. The X-1 is tricked-out like a jet cockpit, with an ejection seat (non-functioning, we assume) and an instrumentation panel to make any gizmo junkie's heart race. The Vapor's interior is done in two-seat style, with a bonus steering wheel for the passenger and a special "stealth mode" for the exhaust system. If the Air Force was looking for "shock and awe", Galpin totally delivered.

However, the Project: Supercar campaign does raise a couple of questions:

♦  Would we have to take a physical to score a ride in one of these babies?

♦  Does any enlistee really expect to receive one of these after signing on the dotted line?

♦  How long until we can get the Vapor's "radar-absorbing paint" on our Chevettes?

If you're interested, you can visit the USAF's flash-heavy site for vid clips about the making of the X-1 and the Vapor. (Unfortunately, the Air Force seems to have gotten the memo about teens and badass cars, but not about embeddable videos. You'd think an org that has the word "cyberspace" in its motto might know better.)  And if you're really interested, a press release about the whole thing is below.

Now, as you were.

NORTH HILLS, Calif. (June 1, 2009) – Galpin Auto Sports collaborated with the United States Air Force to create  two customized vehicles for its 2009 Super Car Tour – a new U.S. Air Force recruiting initiative that kicked off in May. The white Ford Mustang ‘X-1’ and black Dodge Challenger ‘VAPOR’ are Air Force-inspired designs that will travel across the country this year as part of a mobile marketing campaign to educate young people on the mechanical and technical career opportunities available within the Air Force.

Southern California based Galpin Auto Sports is widely known for its corporate and one-off vehicle designs, through its involvement with various movies and TV projects, including the 2008 “Knight Rider” series’ KITT car, the upcoming movie car in the thriller “The Red Mist” and the acting-home base of MTV’s “Pimp My Ride”.

The Air Force looked to Galpin Auto Sports to create two unique hyper-styled vehicles with the most technologically advanced features available. The vehicles are a combination of form, function and futuristic entertainment all fueled together. To see the entire build of the X-1 and Vapor, please visit: http://www.airforce.com/supercar/.

Representing the muscle of the Air Force, the ‘X-1’ Mustang is a heavenly matte-pearlescent painted supercar with a jet cockpit that includes a single-driver ejection seat in center of vehicle, short shifter, flight stick, and advanced instrumentation panel. The ‘X-1’ also has a concealed motorized steering wheel, custom foot pedals, GPS transponder and the innovative dash is equipped with a touch screen monitor and sensor pack that displays night and thermal vision. The 4.6 liter engine includes 3-valve Ford Racing heads, cold air intake, hot rod cams, and long tube headers creating 500hp and is maintained by a custom Ford Racing Tuning Program.  The Vertical doors feature interior panel fabrication to complete the ‘jet-like’ feel of the ‘X-1’, which will appear on the East Coast portion of the Air Force recruiting tour.

The stealth-black Air Force Challenger ‘Vapor’ features a biometric access to open the Vertical doors, a custom Stealth body kit with Jet enhancements and a carbon fiber exterior trim. Other exterior components include one-off carbon fiber wheels, a custom stealth exhaust mode that allows the vehicle to run in complete silence or you can open up the headers to facilitate the aggressive sound of the engine, shaker hood, radar-absorbing paint, proximity sensors, and a 360-degree camera with ¼ mile range. The interior of the ‘Vapor’ is complete with aircraft style controls, a passenger side steering wheel, GPS tracking, night and thermal vision via a film on the front windshield, and the most technologically-advanced computer system with remote control UAV-type access from anywhere in the world utilizing the internet. The ‘Vapor’ also comes with two custom flight helmets in line with the Air Force theme of the vehicle.

The vehicles recently debuted in Austin, Texas under Brigadier General AJ Stewart, commander of Air Force Recruiting Service as well as 60 U.S. Air Force marketers and GSD&M Idea City. Galpin Auto Sport’s Lead Customizer, Mad Mike, was present for the unveiling and felt a personal connection to this project having started his career in the Air Force. “If it was not for the U.S. Air Force, I would not have the knowledge and skills that enables me to stand where I am today.” said Mad Mike.

"We’re looking for hands-on people to serve in critical Air Force jobs and we’re fortunate to be working with exactly those kinds of professionals at Galpin,” said Daniel Elkins, U.S. Air Force Recruiting Services. "The Super Car Tour is illustrative of the kinds of opportunities available in the Air Force where technology knows no limit."

Galpin Auto Sports, located at 15600 Roscoe Blvd. in Van Nuys offers customizing and personalizing services on all new and pre-owned vehicles including collector and classic cars and is the official garage for MTV’s Pimp My Ride. For more information on Galpin Auto Sports’ unique products and services, please contact G.A.S. General Manager, Steve McCord ([email protected]), at (877)-GO-GAS-GO or visit the website at www.galpinautosports.com.

With over 60 years in business, Galpin Motors is the world’s largest volume Ford dealership for the 19th consecutive year. Founded in 1946 and headquartered in Los Angeles’ San Fernando Valley, Galpin is comprised of a family of quality automobile brands including Aston Martin, Ford, Jaguar, Lincoln, Mercury, Mazda, Honda, Saturn and Volvo.

About the U.S. Air Force

The mission of the U.S. Air Force is to fly, fight and win … in air, space and cyberspace. This is achieved through a vision of Global Vigilance, Reach and Power accomplished by extraordinary men and women coming together to make a difference in the world. To learn more about Air Force opportunities, visit www.airforce.com.