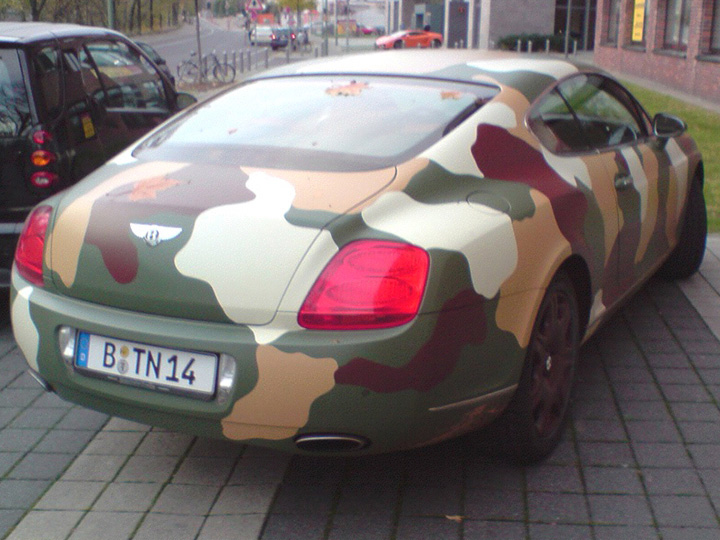 ♦  Sometimes you folks send in images that we can't explain, and frankly, we don't want to. Sometimes, we just want to stare in slackjawed amazement, as we're currently doing at this photo of a Bentley coupe that's been camouflaged--not just in "spy shot camo", but honest-to-Jughead "deer stand camo". That's dedication to a theme. [thanks to Rick Feibusch]

♦  As a general rule, we try not to laugh at people when they're down--much less when they're dead. However, it's a tad hilarious when a Hummer dealer passes away, and in the midst of obit, you find this gem: "Chuck was the loving husband of Kristen and devoted father of Dillon. Chuck was the Director of Marketing for the Lund Cadillac Group. We are sure he would still want all to know that 0.9% financing is still available on all New 2008 Hummer H2's." [Yahoo via JV]

♦  Given our love of cars and food (not necessarily in that order), we don't know how we missed a story about a bid to buy the Dodge Viper brand pitched by a man who's best known for awesome garlic bread. Suddenly, we're hungry and hankering for a road trip. [Edmunds]

♦  The Royal Automobile Club (RAC) Foundation is complaining that the British government's plan to encourage electric vehicle sales will be too successful. Some people you just can't please. [Autocar]

♦  Worried about GM? Feh. Other folks have paid visits to bankruptcy court, and they've come out just fine. [Freep]

♦  We already knew that Iacocca & Co. were losing their company cars. But their pensions, too? [egmCarTech]

♦  Despite all the current corporate hullabaloo, Chrysler is still cranking out ads--like this one intended to boost awareness of Dodge products on the racing circuit. It's not bad, and we like the fact that it's set to the tune of "Nessun Dorma", or "No One Shall Sleep", which is pretty much the situation at Chrysler these days. Also weird: "Nessun Dorma" is from Turandot, which revolves around an awkward, potentially fatal marriage. Sound familiar? [Carscoop]