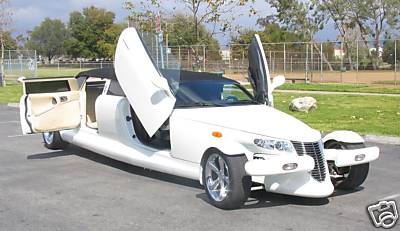 ♦ Someone smarter than us once said that nothing succeeds like excess. If that's true, the converted ragtop, scissor-doored, six-person Prowler limo up for auction on eBay is America's next Bill Gates. It didn't make the reserve bid this go-round, but we're guessing the pimper/owner will find the chutzpah to try again. [eBay via Carscoop]

♦ Hey, buddy: need a goat? In New Zealand, you can get one when you buy a new truck. Not quite as good as a cash rebate, but better than the toaster we got from the bank. [PickupTrucks]

♦ Tesla has issued a recall for 75% of its Tesla Roadsters (i.e. the only car it has in production). Apparently, there's a screw loose. [BusinessInsider]

♦ We doubt that the same folks critical of Obama's fuel economy standards are the same people who would up and move to China in protest. And that's a good thing, because China's new guidelines make ours look like a cakewalk. [NYTimes]

♦ Still hate "Cash-for-Clunkers"? Perhaps you'll take comfort in knowing that similar legislation in the U.K. has generated a boost of 35,000 auto sales in just two weeks. So do as mom told you: close your eyes and think of England. [Autocar]