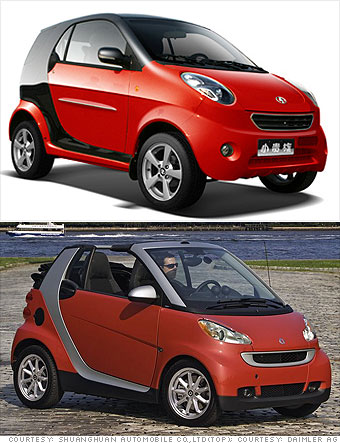 ♦ At left, you see the Smart fortwo and its lower-priced doppelganger (i.e. Chinese knock-off), the Shuanghuan Noble. But which is which? To Daimler's dismay, a Greek court has ruled that informed buyers totally know the difference, so Shuanghuan is clear for takeoff. But let's see Shuanghuan try that in France. [WorldCarFans]

♦ Policemen and policewomen of America: we know you were crushed to hear that you'd lost your shot at the Pontiac G8. Perhaps a fleet of Lambo Gallardos would make you feel better? Yeah, we thought so. [Autogespot]

♦ We love innovation, but a car that runs on compressed air? Have those guys never had to pump a BB gun? [DetNews]

♦ Thanks to the Big Bailout, folks in the States have been fretting about government bureaucrats designing cars, but across the pond, things are far more Big Brothery. In the U.K., select buses and taxes are testing out an "Intelligent Speed Adaption" system, which automatically slows vehicles when they enter reduced-speed zones. It's a sad day for speed trappers everywhere. [AutoExpress]

♦ Another annoying ironic/hipster/faux-nerd video is making the rounds--this one about the Prius. However, here at TCC, we'd rather not encourage that sort of behavior. It's one thing to work really hard at looking cool; it is another thing entirely to simply be cool, as this old-skool video about the making of Chryslers clearly is. [DarkRoastedBlend]

First drive: 2021 Jeep Wrangler Rubicon 392 proves just how fun nonsense can be
Commenting is closed for this article
Contribute
Send us a tip Comment Contact the editor
Follow Us