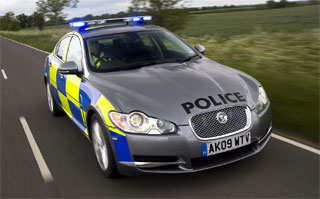 Here in the U.S., police generally make do with high-volume, low-tech fleet vehicles like the long-lived Ford Crown Victoria or the more recent Chevrolet Impala or Dodge Charger - all perfectly capable of the job, but not particularly luxurious or sporting. In the UK, however, things are apparently quite different. Jaguar has just unveiled a Police pursuit variant of the XF, and it's shopping the car to forces across the Kingdom.

"Police forces are looking for vehicles that represent value for money, have good environmental credentials and deliver the power and performance required of a pursuit vehicle," said Geoff Cousins, UK Managing Director for Jaguar Cars.

The Police-spec Jaguar XF manages a thrifty 35 mpg (U.S.) and carbon emissions of 179 g per kilometer - not too bad by any standards. But it's also got to be quick to keep up with the likes of Jason Statham's on-screen alter-egos.

"We hope that with this amount of torque on tap – and a 0-60mph time of 5.9 seconds, we will meet and exceed the exacting standards of any Police Officer driving this car," said Cousins.