Chrysler Has a New Chairman 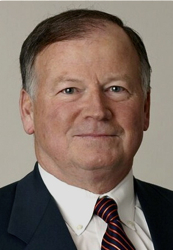 Chrysler LLC has a new chairman waiting in the wings--he's C. Robert Kidder, who will take over for Bob Nardelli when Chrysler exits bankruptcy court.

Kidder is a lifer in boards of management. A former chairman of Borden Chemical and Duracell, Kidder will be in charge of the assets left to a newly constituted Chrysler Group LLC, and will report to the new management structure okayed by the federal government, bankruptcy courts and new investor, Italy's Fiat Group.

Kidder also has served as a director for companies like Morgan Stanley--where he still holds a seat--and Schering-Plough. He's a graduate in industrial engineering from the University of Michigan and won't have to move far, if at all, to take his new post in Auburn Hills--he currently lives in Columbus, Ohio.

“I am pleased to join Chrysler at a time when Chrysler is poised to launch an exciting new era,” said Kidder. "I am confident that Chrysler will emerge from Chapter 11 a lean and powerful competitor, combining its own rich history of innovation with Fiat's technology and expertise to invigorate the American car market and to challenge other car companies around the globe."

Chrysler filed for Chapter 11 bankruptcy on April 30, 2009, and has court approval to sell most of its assets to the new Chrysler Group LLC, which will enable the stronger parts of the company to emerge from court in 60 days--or so say the optimistic leaders of the new Fiat/Chrysler combo.

Still to be named--a board of directors for the new Chrysler as well as a new CEO. Is Wolfgang Bernhard still in the house?