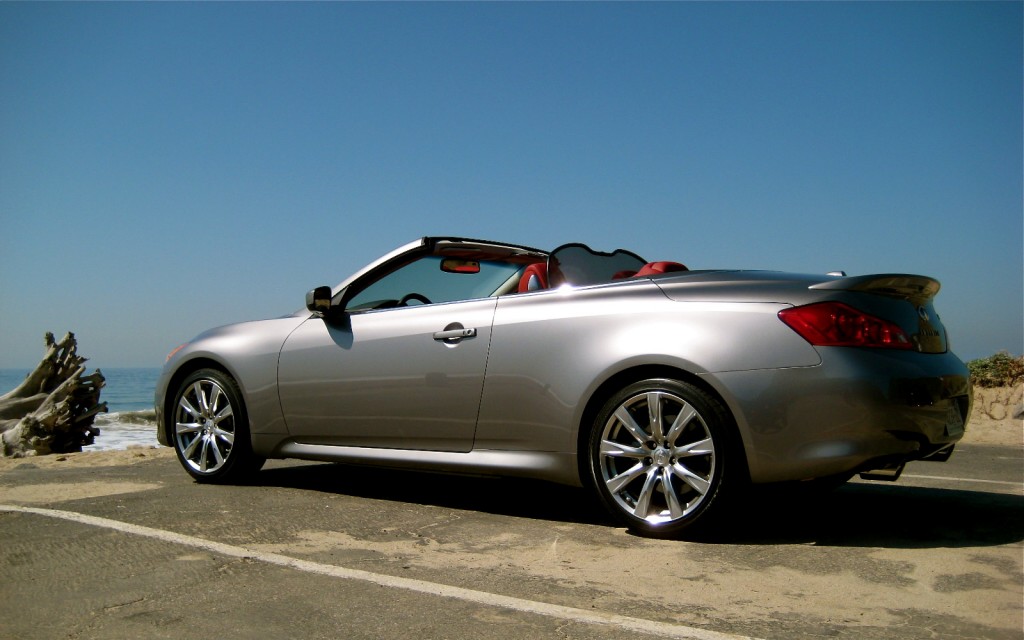 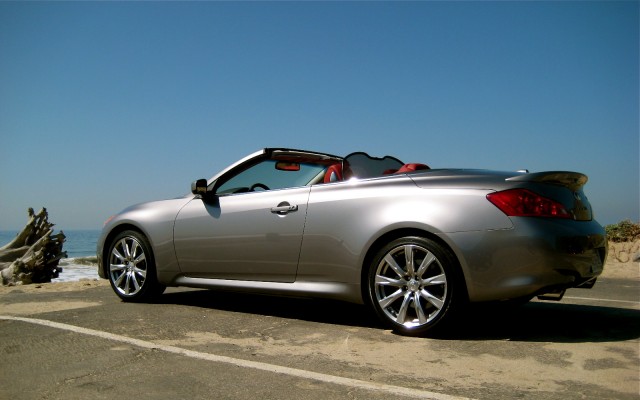 It's been more than a decade since Infiniti sported a convertible in its lineup. With the 2009 G37 Convertible and its clever, pretty folding hardtop, it's clear that this is one haircut Nissan's luxury brand won't regret.

We drove the new G37 Convertible in Southern California, a sort of test lab for all things that have lost their head and found it to be a rare example of how that's supposed to work.

Swift performance, great looks and a raft of sun-loving features are all baked into the new version of the G37, which joins Coupe and Sedan versions of the same architecture at the top of TheCarConnection.com's ratings for luxury sports vehicles. Overall, it scores 8.4 from our editors, with highlights in styling and features. We found the new convertible’s looks, road manners and interior fittings up to speed—even if back-seat room and a drop in acceleration and handling aren’t quite as satisfying as the less stylish BMW 3-Series Convertible.

You'll be surprised how well the Convertible translates from the gorgeous lines of the Coupe. It may be a little better, even--with slimmer pillars and a wider rear, though not much taller of a decklid, the Convertible has an elegant stance from the rear that's more flowing than the other two-door. The cabin's wonderfully trimmed in rosewood or aluminum, with rich, muted color choices and very relaxing seats.

Relaxed performance is part of the Convertible equation--partly its mission, and partly because it's a little portly. The folding hardtop adds 450 pounds to curb weight, and throttle-tip-in-jazzing-up notwithstanding, the Convertible feels a step behind in acceleration and handling. Mind you, we're still talking about a car that shoots to 60 mph in less than 6 seconds and can hit 149 mph. Of the manual and automatic transmission choices, we ended up preferring the automatic; with the Sport package, its paddle shifters were the ideal way of dealing with tourists and gawkers trying to figure out if they should alert TMZ.com to our presence in Beverly Hills, or just call the authorities.

Comfort's a keyword for the 2009 G37 Convertible, rear-seat room is not. Porsche-sized back buckets will barely hold your gym bags, and the trunk's not much larger--appropriately for this venue, it's shallow and not really very useful. The decklid covering it is also stiff and tough to open--probably to limit the flex that might shimmy a support brace for the folding hardtop mechanism, which would lead to Bad Things.
There's no safety testing to report, but lots of anecdotal data on Infiniti's navigation and audio systems, which we love for their simplicity and ease of use. Plug in your iPhone, dispense with the "this is not a real accessory" screen and you're off, sorting and selecting tracks and engaging the navigation system's flyover view.The 2009 Infiniti G37 Coupe does a neat convertible trick: it keeps all the charm of the Coupe while opening up more to the world outside. Bluetooth's an option--really?--but you'll want to race beyond the estimated $50,000 price point with the Premium and Sport packages anyway.