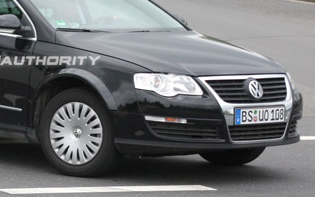 There's a new 2012 Volkswagen Passat in the works, and early spy shots of prototypes hint that it'll be longer and wider than today's car.

The giveaways, according to our colleagues at Motor Authority, are the wheel arches on their spy-shot car, as well as a wider B-pillar on the test mule. The four-door undergoing early testing will have a wagon companion, as it does today.

Speculation says the next Passat will arrive in 2011 as a 2012 model. The new sedan could offer up a V-6 with almost 300 horsepower as its top option; a diesel version is a sure thing, as is all-wheel drive, and a hybrid is a distinct possibility.

Other high-tech features on the next-generation VW Passat will include a new user interface for secondary controls, and stability control with some measure of automatic steering to correct skids. There are fanciful rumors of airless tires and other gee-whiz features that sound patently unbelievable, so we'll spare you those.

Still to be decided: what place the new Volkswagen sedan built in Tennessee will have on the U.S. VW lineup. It is possible the "NMS" will push the Passat upmarket into a premium niche, that the Volkswagen CC could be our "new" Passat, or that all three might live in happy coexistence with a new Jetta anchoring the four-car, four-door lineup.

First drive (again): The 2022 Volkswagen Taos shows off its handling, unwraps interior
Comments (0)
Commenting is closed for this article
Contribute
Send us a tip Comment Contact the editor
Follow Us