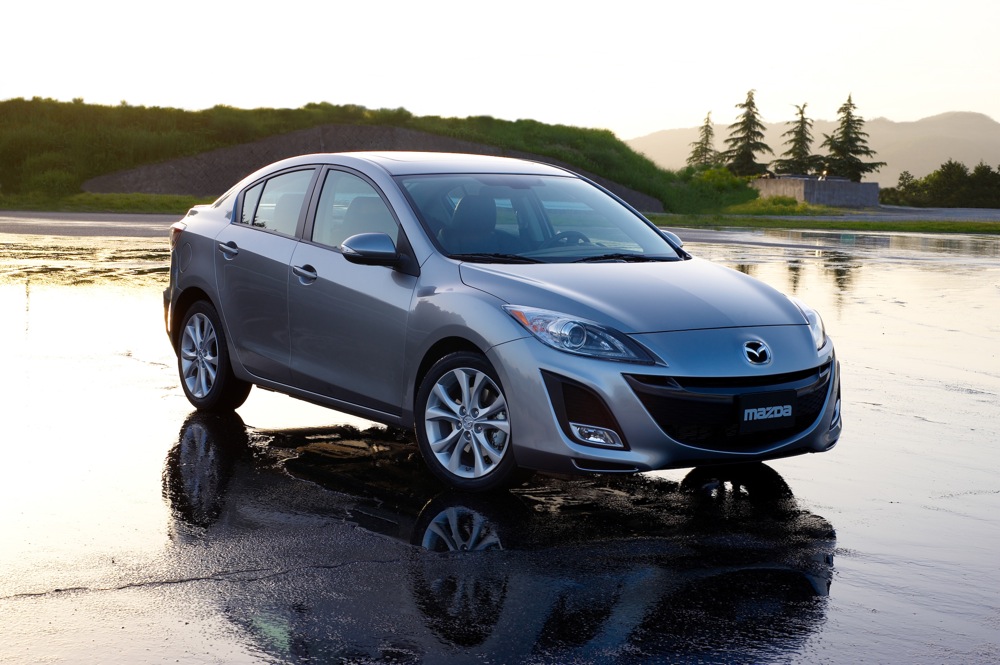 We've told you a few times about the 2010 Mazda Mazda3 (redundant? Ask Mazda and Chrome Data about model names) and published our hallmark Bottom Line and Full Review, too. But a trip to southern California gave us a perfect excuse to seek out the "other" Mazda3, the less powerful base car that will be filling out the sales figures while enthusiasts wet themselves over the high-line Mazdaspeed3 versions yet to come.

From its grinning front end to its pert little rear, the base Mazda3 is close kin to the pricier models. It gets the same four- and five-door body styles as the uppity 2.5-liter version. There are key differences, though: ultra-base models lack stability control, the manual shifter option has five instead of six gears, and some option packages offered on 2.5-liter versions are not found on the checklist. Our test car, a 2010 Mazda3 i Touring, came with the automatic transmission and standard stability control, along with an audio/moonroof package, Sirius and special pearl-white paint.

There aren't many vivid distinctions among the various Mazda3 models. Though it's down 19 horsepower from the 167-hp, 2.5-liter four, the smaller four's 148 horses aren't too overworked in keeping up with typical freeway traffic and delivering 24/33 mpg fuel economy. In fact, this Mazda3 feels best engaged from about 45 mph to 75 mph, the perfect working powerband for commuter traffic. The automatic shifter's sport-shift mode feels like a manual lever in size and action, and brightens the driving feel a bit. It's an understeerer for sure, and can wander a little on straight lanes; you'll notice it more via the skinnier steering wheel, too.

Our major complaints with this Mazda3 came down to one baked-in issue--the cabin noise generated by the engine and suspension--and two that can be factored out with options. Number one: it's small. I'd never buy a sunroof in the first place, but the Mazda3's glass panel has a deep mount that cuts deeply into headroom. So deeply, the headliner's even trimmed out to scrape additional cubic inches of headroom. Ratcheting the driver seat to its low position helped, but I'd bring a baseball hat to keep my DNA from transferring over to the headliner. In my preferred driving position, there's almost no rear legroom and headroom is scarce there, too. Number two, the buff-colored interior is one of those shades that no automaker does well--it's difficult to match pieces, and it highlights the grainier pieces of plastic in a cabin that's otherwise pretty suave. Choose a different interior shade if you hate dirt, but hate cleaning more.

It's in features where the Mazda3 shines. Bluetooth is standard on this and most models, along with steering-wheel audio and phone controls. A Bose Centerpoint audio system packaged with the moonroof came also with Sirius satellite radio, making this an ideal version for the commuter who needs to be entertained and productive. The options boosted the price from $18,350 (plus $570 destination) to $21,045.

At that price, it's fair to look at the less expensive Korean and American compacts when looking over the base Mazda3. Among the more engaging small cars, though, the Mazda3 may be your best bet--particularly if you like to start the work day with a smile.