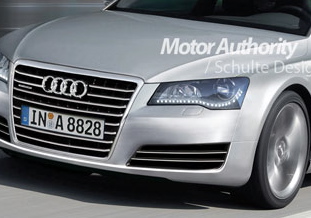 The 2011 Audi A8 is on track to emerge sometimes next year.

The current A8 and long-wheelbase A8L get high marks from our test drivers here at TheCarConnection.com, but today's top Audi has been around since 2003 while a new BMW 7-Series and a new Mercedes-Benz S-Class have been introduced. A minor refresh aside, the A8 is overdue for a complete reworking, and it will get it--by the end of next year, making it a 2011 model in Europe, and possibly a 2012 model in the U.S.

Audi CEO Rupert Stadler says the new car will be “the sportiest luxury sedan in its class" and expects it will be shown for the first time in November. A V-6 may make its way here as the base engine (likely, the new supercharged V-6 found in the 2009 Audi A6), and some markets could even see a four-cylinder version if emissions regulations and fuel economy rules continue to tighten around the world.

Regardless, the Audi aluminum space-frame architecture will continue, and all-wheel drive will be a hallmark of the new car. Those are safe bets--now, anyone want to predict where and when we'll see the A8 first?