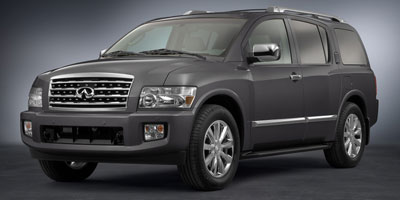 The 2010 Infiniti QX56 is already in showrooms, and the upscale Japanese brand says the pricetag starts from about $56,050.

Not much has changed for the new model year with the QX. The big "Endurance" 320-horsepower V-8 still powers the seven-passenger SUV, and a five-speed automatic links in with rear- or four-wheel drive.

Standard features on both versions include leather seats, a navigation sysstem with a music hard drive and Bose premium audio. Among the options: radar cruise control, DVD entertainment system and a tow package for rear-drive versions.

Heavily updated in 2008, the QX56 is headed for a date with destiny. Nissan's converting its Mississippi truck plant over to commercial-vehicle production and when it does, the QX56 will hail from a Japanese factory. Infiniti's said to have big ambitions for the next big QX, possibly pushing it into Range Rover territory--and the move to Japan comes just about the time when the big sport-ute is due for replacement.