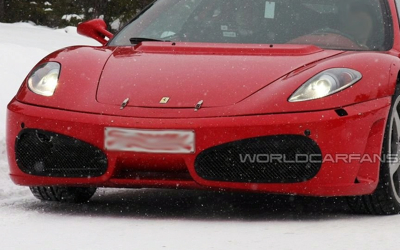 The latest test mules are on the streets, which makes a fall debut for the 2010 Ferrari F450 all the more likely--at least in concept form, according to German car magazine Auto Motor und Sport.

The F450 has been spotted in prototype form, like the snippet seen here from a round of winter testing (or for those of you in Detroit, summertime). Now AMuS, via Worldcarfans, says the new car will show up as a concept at the 2009 Frankfurt auto show in September.

The new longer-wheelbase car will replace the 2009 Ferrari F430, and will grow a little in height, too. A new V-8 engine related to the powerplant in the Ferrari California hardtop convertible will be installed, and could be pumped up to 585 horsepower. A minor concession to the green movement could come in the form of a mild regenerative-braking system.

Stay tuned to our Ferrari tag to follow the progress of the F450 from spy shots to concept cars to the Frankfurt show floor.