Volkswagen On The Offensive; Out To Prove That Diesel Is Awesome 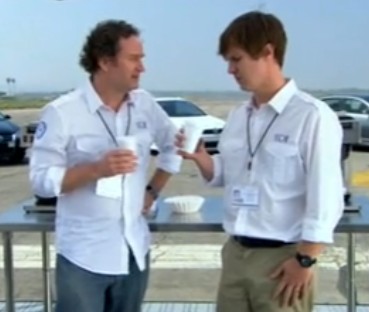 Volkswagen's feeling a little punchy these days. Across the pond, VW is angling to buy Porsche AG, the other major holding of its parent company, Porsche. And on this side of the Atlantic, Volkswagen has launched not one, but two ad campaigns. One's pretty standard, but the other is definitely on the ambitious side.

The less reachy campaign, called "Meet the Volkswagens", is a fairly straightforward push of various VW models, starring the popular, shiny Max the Beetle and his new "friend", a 1963 VW Bus. The publicity materials describe it as "I Love Lucy meets Desperate Housewives yet with a bite!" And it's just as fresh and edgy as that sounds. If you feel like waiting for a QuickTime movie to download, you can catch one of the new TV spots by clicking here.

The more ambitious project is called "TDI Truth & Diesel", and it's a re-branding campaign for diesel engines, centered on Volkswagen's line of products and its TDI clean diesel technology. We say "ambitious" because changing America's opinion of diesel will be an uphill battle. When most Average Joes and Janes think "diesel"--if they think of it at all--they're reminded of clattering car engines from the 70s and 80s, or possibly big rigs. Also: higher fuel prices. VW is clearly hoping to change those associations so its diesel products will do well in the U.S. market. We only wish they could've done so without resorting to warmed-over dialogue that could've been taken from any number of straight guy/funny guy ads. (The stagy ones for cranberry juice come to mind.) Check it:

All that said, we still give VW big ups for taking so many chances. That's more than most companies are willing to do in this economy.

UPDATE: Looks like our colleagues over at GreenCarReports.com are also covering the launch of these campaigns. Not surprisingly, their take is somewhat less jaundiced than ours.