With Chrysler Bankrupt, What Will DeSoto Cab Do Now? 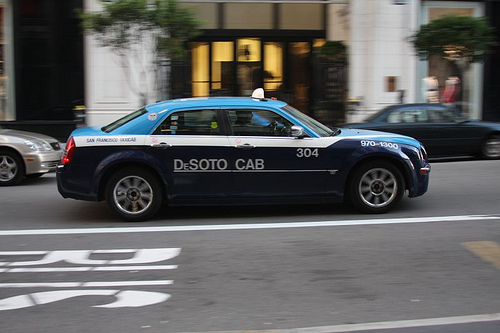 Anyone who's lived in San Francisco knows the city's kamikaze cabbies. With so many car-free San Franciscans, cabs are the default public transport once night-time Muni service goes into "Night Owl" mode.

These days, only car geeks recognize the special nature of one SF taxi company: DeSoto Cabs. It's a last link to a long-gone piece of Chrysler's past. To keep the flame alive despite Chrysler's bankruptcy and uncertain future, we highlight the DeSoto Cab Company's decades of using Chrysler products--since at least the 1930s.

Over the years, their fleet included DeSotos (until that ill-fated, mid-level brand met its end in 1961), supplemented by Plymouths and Dodges. The fleet downsized with the arrival of the K-Cars and minivans in the 1980s, despite the marginal hill-climbing performance of their original four-cylinder engines. And would you believe a Dodge Neon cab, even?

These days, the proudest DeSoto cabs are clearly the Chrysler 300s. Several beaten-looking Dodge Intrepids are still running around (one of them gracing the odd crime scene),  and the fleet also includes Dodge Caravans, Chrysler PT Cruisers, Jeep Grand Cherokees, and Dodge Durango SUVs. The newest newest and oddest member of the DeSoto fleet has got to be the Dodge Dakota Club Cab below.

But without any hybrids in Chrysler's near-term future, DeSoto may be stuck. Other SF taxi companies are just retiring their first 15 Ford Escape Hybrid taxis, and hybrids are likely to spread through big-city fleets across the country.

Of course, Chrysler did have hybrids--briefly--before they killed off the Dodge Durango Hybrid and Chrysler Aspen Hybrid models as part of the shutdown of that SUV line last December. The next one, the 2011 Dodge Ram Hybrid, seems an unlikely cab. So we're left to wonder: Fiat cabs in the city by the bay?

But DeSoto isn't 100 percent in the Chrysler camp. We came across a photo of a Mercury Grand Marquis in DeSoto livery. Walter P. Chrysler must be spinning in his grave. 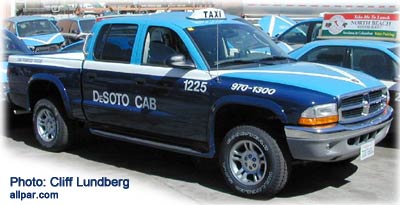