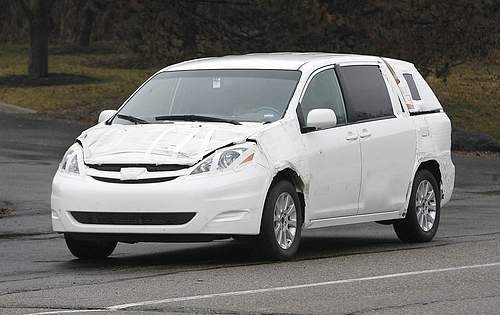 In These Economic Times, it only makes sense for businesses to streamline operations. Toyota is doing just that by wonking the design of its Sienna minivan to fit the company's "MC" platform. So say the folks at Detroit News, who apparently nabbed the shot of the Sienna at left, clearly in mid-wonk.

The "MC" platform is noted for its flexibility, and its ability to accommodate vehicles ranging from the Camry to the RAV4 to the Highlander attests to it. Obviously, it'll be a while before we see a finished prototype, but we know that it'll begin production in January 2010 at Toyota's facility in Princeton, Indiana for the 2011 model year. Maybe folks will even be buying cars by the time it hits the lot.