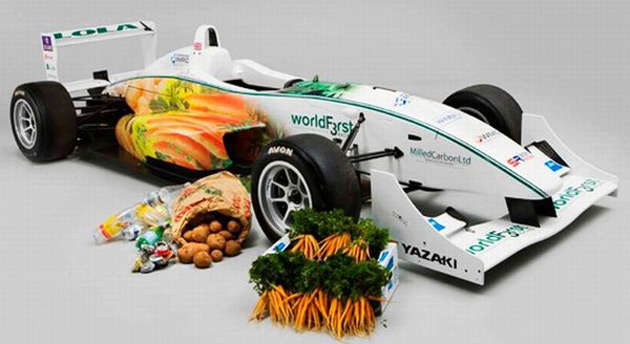 The ecoF3 from WorldFirst

The ecoF3 from WorldFirst

Call that Cathy lady and tell her that her dream car just came in.  It runs on chocolate. No joke.

A group from England's Warwick University called WorldFirst has developed the vehicle--dubbed the ecoF3--in hopes of proving "that an environmentally friendly car is not necessarily a slow car". (Obviously, they missed the part about their U.K. peers at Bee and their Bee roadster, which'll hit 60mph in under three seconds. To say nothing of the Tesla Roadster and many other examples of EVs that smoke the environmentally unfriendly competition. But whatever.)

The ecoF3's contents list reads like the menu at a vegetarian restaurant: The driver's seat? Made of soybeans. Body? Potatoes. Steering wheel? Made from carrots, doc. And in the tank, there's oil from chocolate and other sources. We will assume that the ecoF3 also features a button nose and two eyes made out of coal.

There is some bad news for Cathy, though: there's only one seat. Looks like she'll be flying solo again: