The Next Generation Weighs In On the New York Auto Show 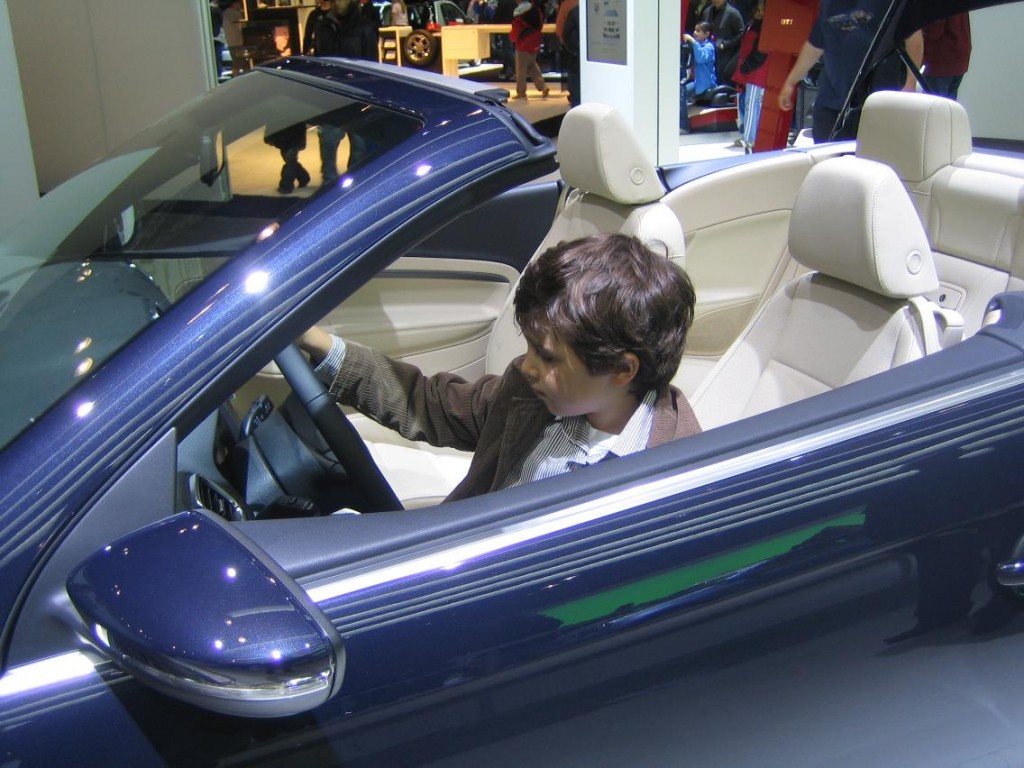 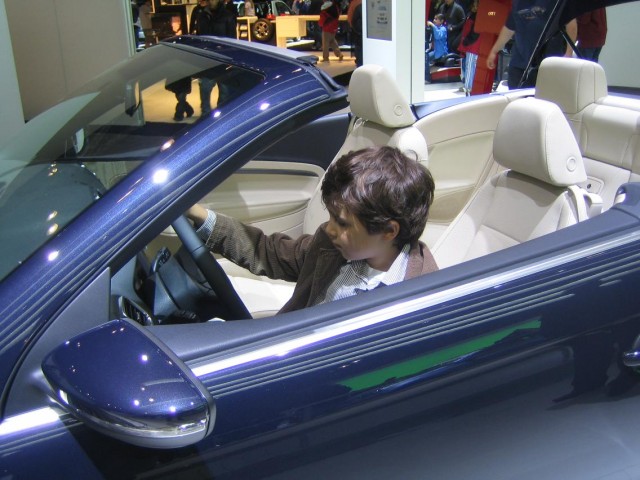 Whether you love or hate auto shows, there’s no denying they’re a family affair. And without getting ourselves in trouble, a look across any show floor suggests that of the kids eagerly climbing in and out of new cars, boys outnumber girls by a substantial factor.

Those boys are tomorrow’s car buyers, and they may even influence their parents’ choice of vehicle. Many of us writers tried to tell our parents what to buy from the time we were old enough to tell a Chevy from a Volkswagen.

So we enlisted our friends’ son Luc, who at 9 years is already a three-year veteran of the New York Auto Show. We covered Luc’s take on the show’s green cars elsewhere, but he had more thoughts on other cars as well.

2009 MazdaSpeed3: He loved the bright metallic blue color of Mazda’s hot hatch, not so much the insane-clown grin on the restyled front end. With a lower grille sporting mesh rather than the blue car’s “smile strakes,” a more sedate Mazda3 GT won his approval. 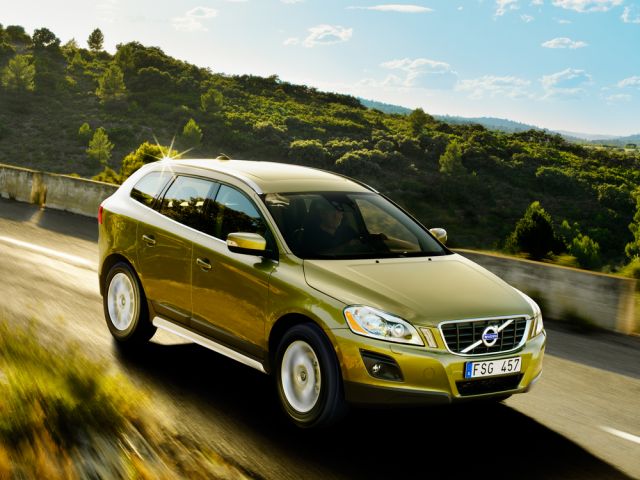 2010 Volvo XC60: When you’re four feet tall, high beltlines can doom your rear-seat view to power lines. We were both impressed by Volvo’s “dual booster” seats, in which a front portion of the rear seat cushion lifts up on top of the piece behind it, adding a good four inches to the seat height for smaller occupants. He also liked the XC60’s styling and brown-bronze color.

2010 Chevrolet Camaro: Like the bright yellow car, but most definitely not a Transformers fan, so Bumblebee didn’t do it for him. 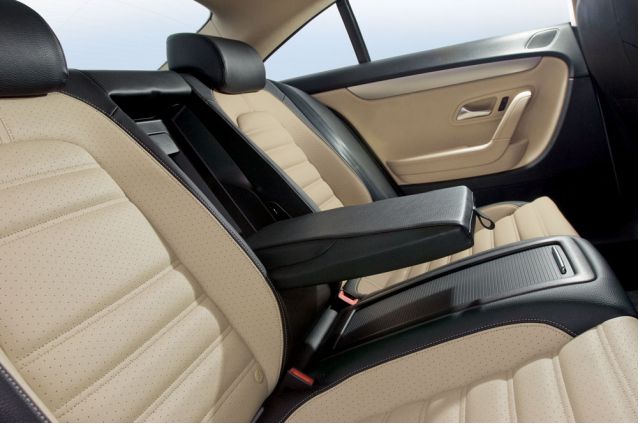 2009 Volkswagen CC: One of two cars Luc asked to see, though he didn’t know the name (“that really cool, low VW I saw on TV”). He liked the elegant tan-and-brown upholstery, and the fact that it was low enough to have door handles below chin height.

2009 Volkswagen Eos: Luc also liked VW’s convertible coupe, and easily figured out how to toggle through the menus on its center display. In fact, he likes convertibles in general—but he didn’t care for the Chrysler Sebring convertible his family rented on a recent Florida trip.

2009 Porsche 911 Turbo and 2009 Porsche Boxster S: Luc thought the pearl white 911 Turbo was “fantastic looking,” and eagerly hopped into the adjacent bright yellow Boxster. Between the Porsches and his Sebring slam, we think he may be a future car critic. 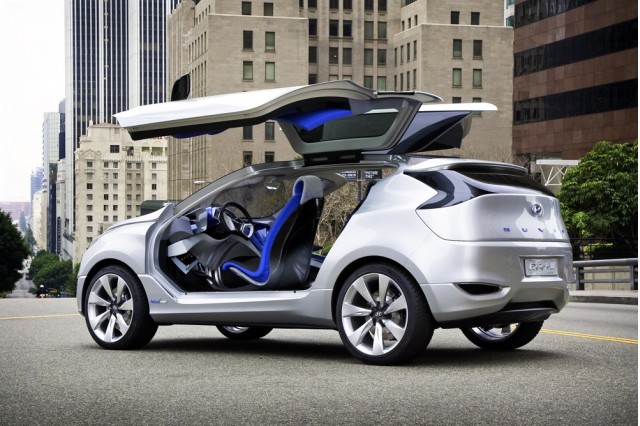 Hyundai Nuvis concept: Gullwing doors fascinated our 9-year-old critic. We visited a handful of exotics with pivoting, raising, or unfolding doors, including the Spyker C8 Aileron and the Mercedes-Benz McLaren SLR convertible. Hyundai’s SUV concept, though, had it all: Space-Age interior with blue lighting, swoopy styling, and wide side doors that opened straight out from the roof. We watched the Nuvis rotate several times, doors opening and closing on cue.

Luc reserved his most enthusiastic "Whoa!" comments for two of the least green cars. His first yelp came as he peered across the velvet rope into the rear compartment of a 2009 Maybach Zeppelin, the new, even-more-luxurious-than-before version of Mercedes-Benz's limousine.

The other came from pure joy as we neared what he designated his favorite car of the show: a 2009 Lamborghini Gallardo. Its flat black paint reminded Luc of the US Air Force SR-71 Blackbird high-altitude spy jet, which he’d visited on the USS Intrepid Enterprise destroyer just a few blocks away.

Ah, to be nine years old, when you can climb all over the cars, pretend they’re yours—and not have to worry about paying for them. 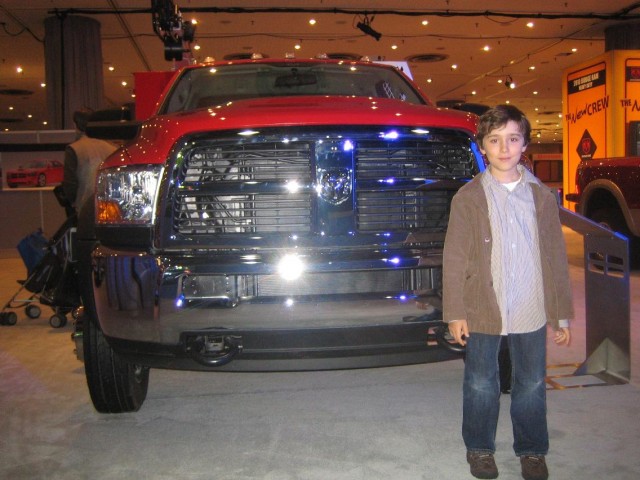 Small boy, big truck, or Luc sizing himself up against a Dodge Ram work truck