The last-generation Scion xB, which was introduced five years ago, developed a cult following of sorts. With its extremely boxy shape and sharp corners, the previous xB had an offbeat, fashionable appeal, and it was practical, too, with an interior that could fit four adults. Scion lost some of that crowd for 2008 with its redesigned xB, which despite measuring a foot longer, weighing 600 pounds heavier, and being less fuel-efficient, wasn’t really much roomier or faster than its predecessor.

The new 2009 Nissan Cube more than makes up for that loss, with a parking-superhero design that’s sized like that first xB, undoubtedly weirder than the xB ever was, and just as practical to boot. Most notably, Cube has an overtly assymetrical design, with a side-swinging rear cargo door, a rear window that wraps cleanly around to the right side to aid visibility, and a beveled ‘frame’ around all the windows. From the side, the Cube’s mid-side pillar is a focal point, dividing curved windows and tapering at the middle, while in front it’s unexpectedly assertive-looking, with side-set headlamps and a horizontal grille, and a “Bulldog in Sunglasses” design inspiration. The overall effect is somewhat whimsical.

While in description alone this reads like a clown-car disaster, the Cube is actually an attractive-looking vehicle and not as overwrought as it sounds. The Cube drew more positive attention in TheCarConnection.com’s recent drive around Miami Beach than several far more expensive exotics we were sharing the road with. At least for now and for a while after the Cube goes on sale next month, it gets envious looks—especially from younger people—like few other vehicles do. 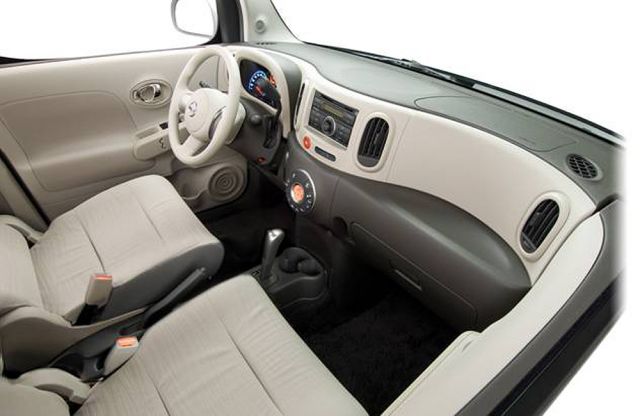 Fortunately, the 2009 Cube is more functional than weird looking on the inside. The interior has contouring modeled after Jacuzzi tubs, along with water-ripple cues throughout, but seating space is the priority. It’s more spacious than many might expect from the outside, and taller adults—including this 6’6” editor—can fit comfortably in the back seat.

For now, the 2090 Nissan Cube isn’t the choice for driving enthusiasts—they might be better served by the better-handling albeit less whimsical 2010 Kia Soul—but it’s reasonably peppy, very refined and quiet, and well put-together.

The 2009 Cube is built in Japan, and it’s a great value, with the well-equipped base model starting at well under $15k. Oddly, when you equip Nissan’s cheapest car, the Versa, like the base Cube, with power windows, air conditioning, and anti-lock brakes (Versa S), the Cube is priced within a few hundred dollars; and that’s before even considering that the Cube comes with electronic stability control, a feature not at all offered on the Versa.

You’ll find our new Bottom Line assessment of the 2009 Nissan Cube, along with a photo gallery, specs, and a list of competing models, all at TheCarConnection.com.