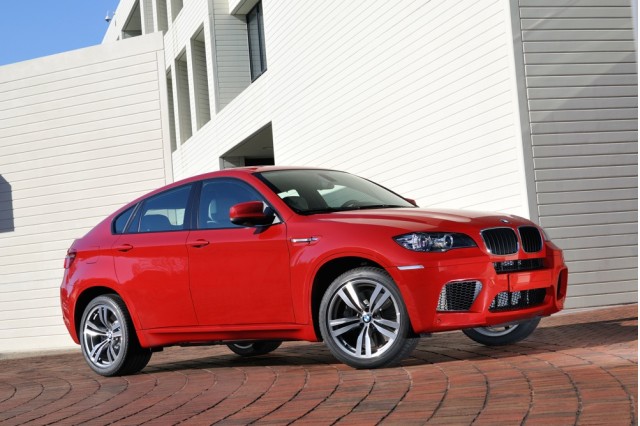 They said it would never happen--a supersport version of BMW's big SUV and its swoopy sister. That was the old normal.

The new normal is a pair of ferocious "M" versions of the 2010 BMW X5 and X6 sport-utes, destined for a world premiere at the 2009 New York auto show. BMW promises the new duo will have the same stunning performance as other M models, and though they don't say it, the new versions are an invitation to an inter-Germany smackdown with the likes of the Porsche Cayenne Turbo.

The M&Ms are the first all-wheel-drive vehicles to bear the singular letter, BMW says. And the designation doesn't come cheaply: BMW stuff its twin-turbo, 4.4-liter V-8 into the machines for a grand total of 555 horsepower and 500 pound-feet of torque. The subdermal injection of power cuts 0-60 mph acceleration times to 4.5 seconds, they claim. They also credit the design of the engine's intake manifold and the precisely timed staging of its two turbochargers for the Xx M's smooth power delivery and distinct engine note. A six-speed dual-clutch automatic handles the shifting work, via shift paddles and an unconventional lever on the center console.

Handling is on the tweak list, too. BMW's xDrive all-wheel drive and Dynamic Performance Control systems spread torque around on demand and change the suspension and steering feel to sportscar levels, BMW suggests, creating "incredible stability and precisely controlled steering qualities." DPC also allows drivers to choose a manual-shift mode and a launch-control mode that makes itself know on the gauges with a racing-style start flag icon. It also shifts the torque bias more to the rear for better handling, and tunes the stability systems to intervene later--which lets drivers have more fun before electronics shut down the wheelspin party. Huge brakes with anti-lock and brake-drying control are upgraded from the standard utes, as are the M's massive 275/40R-20 front and 315/35R-20 rear tires.

Distinguishing the M versions from the standard 2010 X5 and 2010 X6 should be easy. Spotters will note the new fender gills, 20-inch wheels, big air intakes, body-color aero add-ons and quad tailpipes. The M models also sit about a half-inch lower than stock versions. Inside, the M gauges have additional displays and white lighting, along with power heated sport seats and a special steering wheel.

Pricing hasn't been announced, but you can bet it will soar over the $75,000 mark. Standard features will include navigation with real-time traffic data, iDrive, a 12-speaker audio system, radar cruise control, park distance control and xenon adaptive headlights. Options include a head-up display, automatic high beams, and a rearview camera.

We'll have more from the 2009 New York auto show next week--in the meantime, you can see all the photos of the new vehicles over at our X6 and X5 BMW review pages, or read our comprehensive review of the 2009 BMW X6.