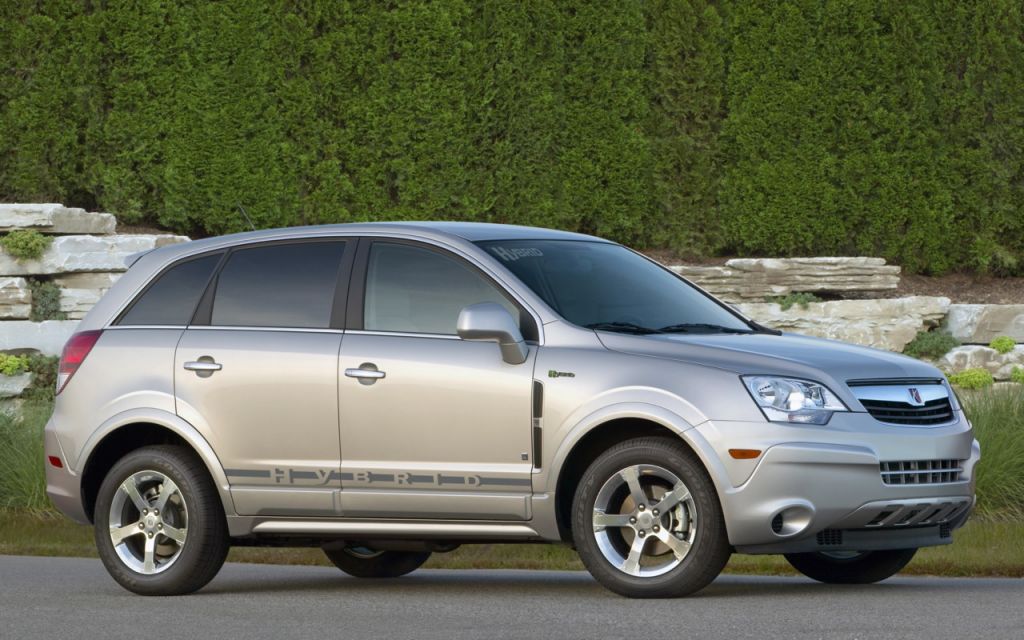 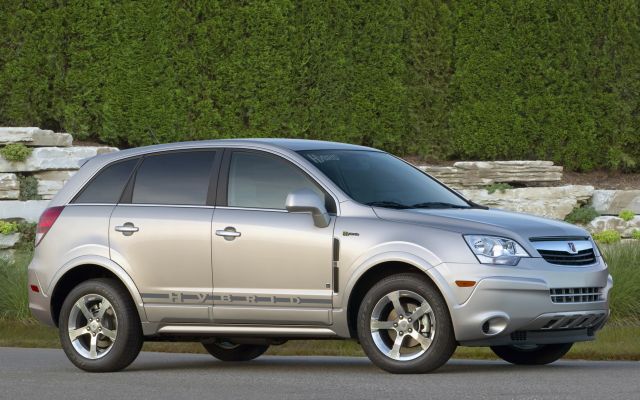 Just two months ago, GM brought out a fleet of ten Vue 2 Mode Hybrids, marked as 2009 models in huge side decals, for a media-buzz caravan from the Detroit auto show, bound for the inauguration and meandering through college campuses.

But the 2009 Saturn Vue 2 Mode Hybrid—with a full hybrid/V-6 powertrain capable zero to 60 in 7.3 seconds and getting an EPA rating of 28 mpg city, 31 highway—is not yet to be. GM will instead roll out the model later this summer, for 2010.

In the meantime, there’s the 2009 Saturn Vue Hybrid, which will still be sold next year as the lower-priced of the two hybrids. The Vue Hybrid’s mild-hybrid powertrain is carried over virtually unchanged from the Vue Green Line, which first bowed for 2007. TheCarConnection.com last sampled the Green Line then, but given the Vue’s extensive redesign for 2008, the overall package has changed quite a bit. We just spent a week with the Vue Hybrid to find out how it drives and how frugal it really is.

Relative to a full-hybrid like the Toyota Prius or Ford Escape Hybrid, the 2009 Vue Hybrid’s layout is quite simple. A 172-horsepower, 2.4-liter four-cylinder EcoTec engine is mated to a “hybrid enabled” four-speed automatic transmission. Hooked up to the crankshaft is a belt-alternator-starter (BAS) system, which recovers energy from decelerating and braking, then helps give the engine a slight boost during acceleration. It also, importantly, allows the engine to shut off (once warmed up) while at stoplights in Drive, with your foot on the brake, and starts the engine quickly as soon as you lift off the brake. In the Vue, the tach needle drops to a lower position to indicate that. Depending on roads and congestion, start/stop systems like this alone can yield a 20-percent boost in mpg in urban environments.

Just under the tach in the Hybrid’s gauge cluster is a ‘charge/assist’ gauge that shows whether the hybrid system is currently charging the battery or discharging (and helping the engine accelerate). Although the needle freely tilts all the way to the charge side when braking, it’s much more reluctant to tap into full discharge; the needle tilts slightly that way during light or moderate acceleration, but it took full throttle acceleration or nearly that in a very steep hill to bring the needle to full assist, and even then it just lasted a couple of seconds. But the whole time, it was otherwise very hard to discern when the engine was being assisted, and by how much.

How does the 2009 Saturn Vue Hybrid drive? We’re prone to cut it a little more slack than we would otherwise, because of the fuel-saving system, but we still had plenty of gripes regarding drivability. One of the root issues is that the four-speed automatic has widely spaced gear rations, seems to upshift (in lumpy fashion) later than needed during light acceleration, and then balks to downshift. There’s none of the robust, torquey feel that the Honda mild hybrids have as the electric system kicks in to help.

Acceleration isn’t quick either; a dash to 60 mph, by my informal stopwatch run, happens in a long and seemingly dramatic 12 seconds.

Much of this disappointment might have to do with weight; the 2009 Saturn Vue Hybrid now weighs more than 3800 pounds; the last-generation Vue Green Line, where the system made its debut, weighed several hundred pounds less.

TheCarConnection.com has found the V-6 Vue to be very composed and quite enjoyable overall, but the Hybrid is a different story; the ride is overly firm and choppy, and you could hear every little pavement irregularity carried through the front struts, with coarse surfaces bringing a boominess into the cabin. Yet it’s not a fun vehicle to hustle through curves, and the steering remains a sore point for its vague feel and on-center unease. The Vue Hybrid now gets four-wheel anti-lock disc brakes (and Stabilitrak for added safety), but attempts at gradual, smooth braking are still met with unpredictable lurches from the hybrid system.

As with other models of the Vue—which is now built in Mexico—the ding-resistant door panels that at one time attracted buyers to the Saturn brand are history. We’re also a bit disappointed in how flat and short the contouring is for the seats; combined with a steering wheel that doesn’t telescope, it’s one of the least comfortable perches for this tall reviewer. Entry and exit are a cinch though.

Nevertheless, mileage was excellent. In a 35-mile loop consisting of about one third low-speed urban crawl, one third suburban boulevard cruise, and one third freeway, driving gingerly but cruising around the speed limit or with traffic, I averaged 31 mpg in the Vue Hybrid. And over the course of the week in more than a hundred other miles of mixed driving, I averaged about 27 mpg.

That’s good, but what followed in my fleet was a vehicle that those who care about fuel economy might very well be cross-shopping with the Vue Hybrid: the Volkswagen Jetta TDI. Especially in SportWagen form, the Jetta is a great vehicle for small families and although its cabin doesn’t feel quite as tall as the Vue’s, its cargo capacity behind the back seats is slightly larger overall. The Jetta—whether as a sedan or SportWagen—gets EPA ratings of 30 mpg city, 41 highway with the six-speed manual, which we had, or 29/40 with the excellent optional DSG automatic.

Taking the Jetta on that same loop, in nearly identical traffic conditions two days after the Vue, we averaged nearly 43 mpg. We followed the same manner of conservative driving on the loop. By the end of a comparable week, we’d averaged 36 mpg—admittedly driving the Jetta somewhat less gingerly. We’ve already said plenty about the Jetta. TheCarConnection.com likes the whole package, but the tremendous torque of the TDI engine in highway cruising especially proved hard to resist, as even lugging along in sixth gear we could ‘waft’—in the way of big lux sedans—quietly and quickly from 65 to 80 mph and beyond.

The 2009 Saturn Vue Hybrid starts at $28,160 and comes with more standard equipment than the base Vue XE but not as much as the XR; that places the price premium, but TheCarConnection.com’s estimation, at nearly $4,000. Using $2.50 a gallon, it would take more than ten years to pay off for the typical driver; but if the price of fuel climbs a lot higher the Hybrid could make a difference. As equipped, the Vue Hybrid totaled $29,845; the Jetta TDI we drove would have priced at less than $26,000 as a Sportwagen.

In the Vue Hybrid’s class, there’s also the Ford Escape Hybrid, and its platform-mates, the Mercury Mariner Hybrid and Mazda Tribute Hybrid. In the city, these Ford full hybrids will easily top the Vue in mpg, although they cost a bit more.

The overwhelming message here is that there is no ideal ‘green’ choice for everyone; not all of them will make economic sense at the moment either. And with multiple choices like full hybrid systems, mild hybrid systems, and clean diesels to choose between if you want to save fuel we can only recommend that you drive several models and crunch the numbers.