Where The Hell Is My Flying Car Already? 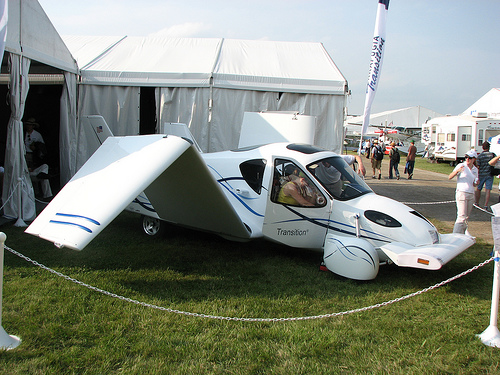 How many times have you found yourself stuck in traffic, shouting that very question to the rubbernecking hordes before you? The flying car--along with the robot butler, the teleportation chamber, and the true Everlasting Gobstopper--has been promised to generations of children, but no one has ever delivered.

A Massachusetts-based company called Terrafugia is promising to deliver a bona fide flying car into the hands of consumers  in the next 18 months. The Terrafugia Transition allegedly runs on regular unleaded fuel and converts from car to plane in about 15 seconds. The company also claims the Transition flies about 500 miles on a tank of gas.--or rather, the vehicle will fly that far once they get it in the air. First, there is the small matter of the Transition's initial test flight.

Below, you can watch Russ Niles of AVweb interview a Terrafugia rep about the Transition. To call Niles pessimistic is a bit like calling Dick Cheney hawkish--and I have to say, there are a lot of unanswered questions that leave me siding with him at times. (Making things worse: the fact that Terrafugia's website has crashed. This does not instill me with confidence in its product's ability to fly.) However, there are at least 40 folks who've already placed orders for the $200,000 vehicle, so perhaps I'm in the minority. I hope so--I'd love to see this thing take off.