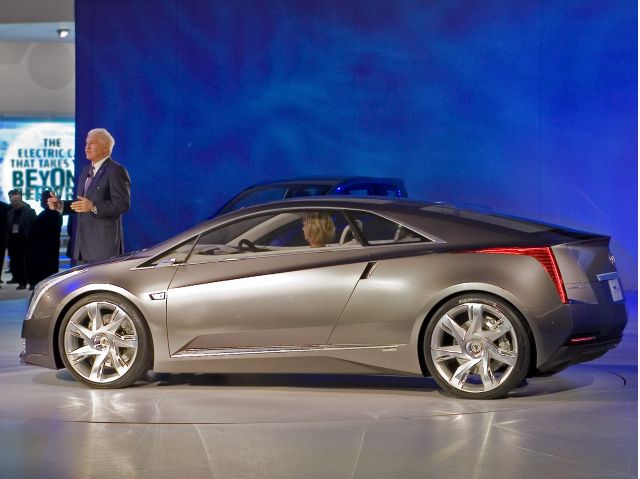 Most every story from the 2009 Detroit Auto Show will mention the dour mood of the auto industry and that of the show's host city. The reports are right. Many smiles seen within the city limits are forced. But amid this gloom, there was a small beacon of light.  Unlike years past when pre-show snowfalls paralyzed the city, showed Detroit's governmental incompetence, and made attending the show a genuine hassle, Saturday's heavy snow was cleared from around Cobo Hall before activities started. Oh joy.

Now for the real news: Inside Cobo, General Motors kicked off the manufacturer press conference schedule. In an effort to demonstrate that they build relevant vehicles (and therefore deserves money from the Feds), GM paraded their company's most popular and/or highest-mileage models up a friendly aisle of GM employees (current and retired) who cheered and waved signs saying "Here To Stay." Michigan's ineffectual governor Granholm was among the business, labor, and governmental leaders who escorted the cars to GM's presentation stage. She also held a "Hear To Stay" sign, no doubt dispelling the notion that Michigan would be ceded to Canada if the auto industry went the way of Chernobyl. (Michigan term limits prevent J.G. from running for a third term, so she obviously didn't mean she was here to say.)

Along with showing vehicles we expected to see (the new 2010 Cadillac SRX, Buick LaCrosse, and 2010 Chevrolet Equinox), GM presented a few surprises. We anticipated the production version of the Chevy Beat concept, and it surfaced. It's officially called the Spark. This four-door, which is smaller than the Aveo 5, will go on sale in the U.S. in 2011. GM expects 40 mpg from the Spark.

Another expected attendee was the Chevy Orlando concept. This crossover is expected to be the HHR replacement that is due in 2011. The underpinnings are the new 2011 Chevy Cruze, the Cobalt's blessed replacement. Both the Orlando and the Cruze are due in April of next year … we wish it were sooner.

The most exciting debut for General Motors' first press conference was their electrified Cadillac, the Converj. Bob Lutz introduced the car. The rakish 2+2 demonstrates an evolution of Chevy's Volt … as well as Cadillac's proclivity for funny spelling.

GM has taken to calling the Volt's powertrain "Voltec," an unabashed attempt to develop it as a brand name of its own. Voltec components that power the Cadillac Converj concept include electric drive motors, a battery pack, a range extending generator that is powered by an internal- or compression-combustion engine, and a power control module. The Converj matches the Volt's expected range of 40 miles from an initial charge.

We spoke with the lead exterior designer for the Converj, Brian Smith. Smith also designed the Cadillac Sixteen. His acumen for creating striking shapes continues. He says, "This is a luxury car that somebody can drive without feeling guilty." Cadillac recognizes, that for now, conspicuous consumption is out of vogue. We particularly liked the cab-forward Converj's powerfully drawn rear fenders and the tapered roof (that includes photovoltaic cells to help offset accessory power loads.