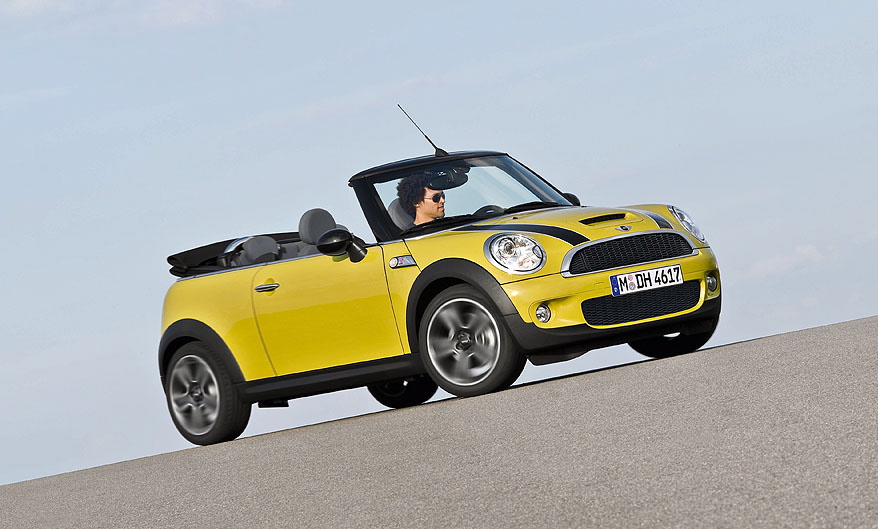 MINI's rolling into the 2009 Detroit auto show next week with a new version of its Cooper Convertible.

Along with the electric version of the MINI we've shown you before, the new Convertible appears in Cobo with a completely new chassis and style, though at first glance it's hard to tell the new car from the old. Like the revamp of the Cooper hardtop in 2008, it's a subtle redo that should improve interior space and ride quality in the new Convertible, while making it easier to build over at the MINI factory in Oxford, England.

The design is familiar, but some details on the new convertible one-up the original BMW-designed MINI. The combination sunroof-convertible top carries over the hard panel that opens partway at speeds of up to 20 mph--but now there's an "Openometer" gauge that tells you how much time you've spent driving topless.

New hardware includes the 118-horsepower four-cylinder engine in the Cooper Convertible, and the 172-hp turbo four in the Cooper S Convertible. A pop-up rollbar helps crash safety, while run-flat tires give you valuable miles when the lorry in front drops a load of nails and glass on the motorway. (Translated: dumbass Home Depot parking lot!)

The MINI's trunk space benefits from an optional luggage-storage system that locks down the rear seats and snaps in a two-position shelf for cargo needs.

See all the photos we've snared over at our 2009 MINI Cooper Convertible page, and keep your browser tuned here for more MINI news from the 2009 Detroit auto show.