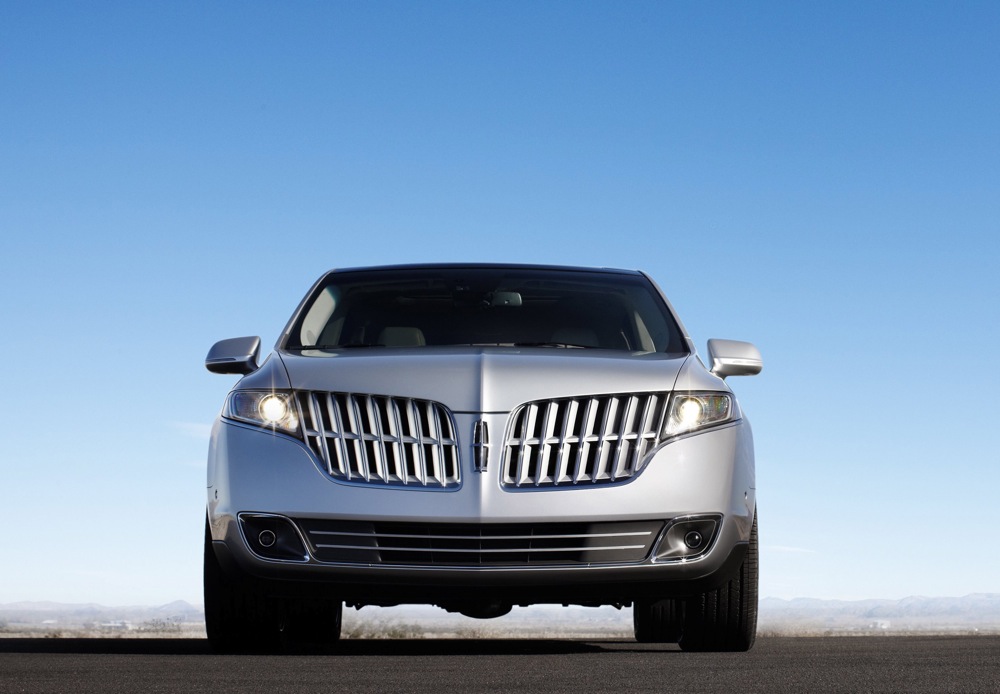 A star of last year's Detroit Auto Show was the Lincoln MKT Concept. The flamboyantly styled baleen whale grille stopped plenty of people in their tracks, but this grille made the transition to production on the 2009 Lincoln MKS quite nicely. Now that we've seen the production MKT, we like it even better.

What Lincoln didn't talk about at last year's auto show as that the 2010 MKT crossover was going to become Lincoln's version of the Ford Flex … our favorite over-sized Kleenex box on wheels.  Because of the lack of differentiation between the Ford Edge and the Lincoln MKX, critics would have shouted their doubts about whether Ford could make the vehicles different enough. Well, the proof is in the product.

Thanks to its dramatically curvaceous body and decidedly un-square roofline, the 2010 Lincoln MKT looks nothing like the extant Flex. The beveled belt line bears a family resemblance to the MKS, and we like the kick-up at the C-pillar and the detailing of the Lincoln star on the front fender. Lesser monkey-see designers would have put a goofy fake vents there on the fender, but the star looks perfect. The top-of-the-line 20-inch chrome wheels help maintain the visual proportions of this big vehicle (it's the same length outside as a Lincoln Navigator).

Inside, Lincoln is proving that they can do great interiors. The look and feel of the MKT is excellent. Highlights include nearly seamless assembly (meaning no cutlines where there shouldn't be cutlines), rich materials, and an overall feeling of quality befitting a luxury car. The upscale seven-passenger 2010 Lincoln MKT will come standard with a power folding third-row seat, first and second-row heated and cooled seats, eight-inch touch screen, a large glass roof, HID headlamps, and the SYNC entertainment controller. Like the Flex, there's ample room for all inside in both six- and seven-passenger configurations.

While you can't tell from the outside, the 2010 MKT is based on the Ford Flex. This is good news mechanically, because the Flex drives well and is impressively quiet and refined. As expected, Lincoln boosts the MKT's on-road game by using the largest current version of their corporate V-6, a 3.7-liter unit. It powers the front wheels with an expect 268 horsepower at 6,500 RPM and 267 lb.-ft. of torque at 4,250 RPM. With a six-speed automatic, engineers expect the MKT to achieve 24 mpg highway, besting two V-6 gasoline-powered competitors, the Acura MDX and Audi Q7. All-wheel drive is optional.

The 2010 Lincoln MKT will also be offered with the 3.5-liter twin-turbocharged and intercooled V-6, one of Ford's direct-injected EcoBoost engines. This engine delivers more power than the Mustang GT's 4.6-liter V-8, with an anticipated output of 355 horsepower at 5,700 RPM and 350 lb.-ft. of torque at 3,500 RPM. All-wheel-drive is standard with this high-performance V-6. Mileage is expected to be a respectable 15 mpg city, 22 mpg highway.

As one would expect on a luxury vehicle, the 2010 MKT is well equipped. In addition to the standards noted above, the following items are on the MKT's equipment roster: a voice-activated navigation system, Sirius Travel Link, a new Cross Traffic Alert system that warns drivers about obstacles when backing out of parking spaces, adaptive cruise control, a dual-rear DVD system, and the Ford-signature keypad on the B-pillar for keyless entry.

The MKT will also offer an auto-park feature that steers the vehicle into a parallel-parking spot at the touch of a button. (This feature is made possible by electric power steering, electronic throttle control, and computer processing using the rear-view camera and back-up sensors.)

According to what we learned, the 2010 Lincoln MKT should deliver on safety. Since it's based on the Flex, we're anticipating full five-star crash test ratings from the government and a Good rating from the IIHS. Standard features include six air bags (including a three-row side canopy), electronic stability control, ABS, traction control, automatic high beams, rain-sensing wipers, plus a post-crash feature that unlocks all doors, flashes the emergency flashers, and sounds the horn in an event of an airbag deployment.

Safety-enhancing options include a collision warning system that's part of the adaptive cruise control. When the potential for a collision is detected, the brakes are pre-charged for faster response, and a visual "heads-up" warning signal is flashed on the base of the windshield. Additionally, Lincoln's SYNC now includes a 911 Assist enhancement that will place a call to a local emergency operator in the event of an air bag deployment incident.

Standing among the Lincolns in Ford Motor Company's booth at the Detroit Auto Show, it's not too hard to imagine a world without Mercury. At least at the 2009 Detroit show, Mercury doesn't get any attention from the spotlight. The Ford brand is rocking with the new Fusion, Mustang and Fiesta. Lincoln is regaining its footing (on some slippery terrain) with the MKS, the refreshed MKZ, and the new MKT.  But it seems that Mercury has not regained any speed the winged wonder may have had. In these days of brand consolidation, it makes one pause.

You can see more photos over at our 2010 Lincoln MKT page. Stay tuned for more from the 2009 Detroit auto show.