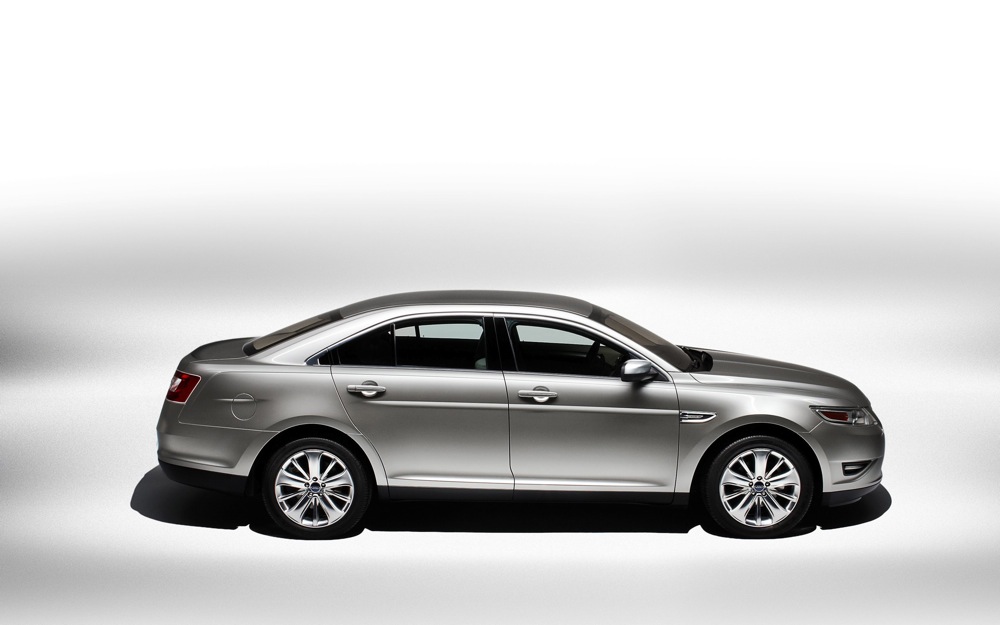 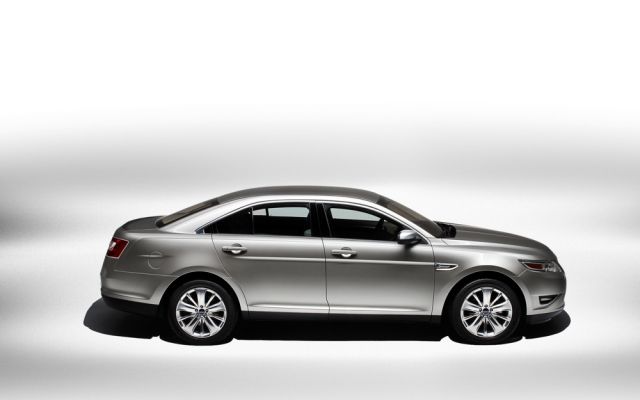 Back when Granadas, LTDs and Fairmonts were Ford's mainstay sedans, the 1986 Ford Taurus was a breakthrough car. In its day, nothing else looked or performed like it.

With a few notable exceptions (such as the excellent Taurus SHO editions), it's been downhill for the Taurus ever since. Unforgivably, Ford management worked the bull hard until it nearly died. Short-term profits were more important than car's best-of-breed style or performance. Inevitably, the Taurus became an also-ran car.

While not a lousy car in its current form, the 2008-2009 Taurus didn't revive sales. For 2010, Ford decided to do something drastically different. The all-new full-size 2010 Taurus is it. With the exception of on the auto show circuit, expect to see it in dealers this summer at a price that matches the outgoing car, $25,995.

The larger, all-new design is decidedly upscale. Thankfully the design team eschewed the outgoing Taurus's giant VW Passat roofline. There's not a hint of the dowdy old style to be found. Ford's marketing people hope that the new Taurus will become the flagship for the brand. This is a tall order given the car's current reputation as a rental fleet pariah and/or a retiree's final vehicular purchase.

It looks like the new Taurus is up to the task with its sculpted hood and sleeker lines. The front fenders are pronounced and the roof is lowered, giving the sedan a sportier stance. Our only quibble is with the grille. The 2010 Fusion and 2009 F-150 both feature prominent three-bar grilles, but the new Taurus's seems to be confused. With a broad upper chrome bar and three dissimilar painted bars below, the 2010 Taurus grille and wrap-around headlights look good, but they simply don't match the other cars in the Ford line. Standard wheels are 17-inch, and 20-inch rims are optional. The new designs fill the sculpted wheel wells and work well with the raised shoulder line of the rear fenders.

Inside, a forward-leaning center stack clearly makes the 2010 Ford Taurus a five-seater. There will be no front bench seats or column shifters available for this car (we hope fleet car purchasing agents aren't crying too hard). New production techniques have yielded better looking and richer feeling dash and door coverings. As evidenced in recently introduced models, Ford knows how to craft high-quality and visually pleasing interiors. Panel gaps and materials appear on par with luxury cars.

Even though the Taurus is a full-size car, the amount of passenger room is still surprising. The adjective "huge" comes to mind. The trunk, thanks to the high profile of the rear fenders and the tall deck, is likewise enormous. Back in the days of drive-in movies, it would have been easy to fit three stow-aways back there with room for beer and chips.

The 2010 Ford Taurus should have the moves to match its trimmer more athletic looks. The mechanicals are based on the Lincoln MKS, a car we've driven and liked. The standard engine is the proven Duratec 3.5-liter V-6, generating an estimated 263 horsepower and 249 foot-pounds of torque. Along with earning ULEV-II emissions certification front-wheel-drive Taurus (all-wheel drive is optional) is expected to deliver unsurpassed highway fuel economy in the class, but Ford hasn't yet released mpg estimates. Plan also calls for the availability of Ford’s turbocharged and direct-injected 3.5-liter V-6 to become available after the car goes on sale. In the MKS, the boosted engine produces 340 horsepower. Perhaps this foreshadows the return of the SHO (Super High Output)?

The base Taurus SE offers a six-speed automatic transmission with a Grade-Assist hill-holding rollback prevention feature, paired with an economical 2.77 final drive ratio. Taurus SEL and Limited models get the SelectShift gearbox used in the Lincoln MKS. It features paddle shifters on the steering wheel, manual shift mode, and rev-matching downshifts. Enhancing acceleration, the Limited series uses a 3.16 gear in front-wheel-drive models, and a 3.39 ratio in all-wheel-drive models to provide compensate for the added weight of the extra drive mechanicals.

Compared to the outgoing model, the chassis components under the 2010 Taurus should deliver sportier ride dynamics. Ford engineers promise more roll stiffness and more responsive steering. Like the MKS, the new Ford uses struts up front and multi-link, fully-independent arrangement in the rear.

Ford added a healthy helping of technology to the 2010 Taurus. Many of these features were once found exclusively in high-end luxury cars, but now Ford is making them mainstream. The list of optional features includes: Adaptive cruise control that uses radar to adjust the car's cruising speed in traffic; keyless entry with push-button start; and Ford's keyless entry keypad with a new pad flush-mounted on the driver’s side B-pillar. These are added to the latest version of Ford's SYNC infotainment interface that includes turn-by-turn route guidance (SYNC and GM's OnStar are in a heated battle to out-feature the other).

One especially interesting option is what Ford is calling multi-contour front seats. These seats include six-way lumbar support and subtle rolling pattern massage. The minute but continuous movement stirs a change of muscular activation helping a driver avoid back pain and help reduce long-distance driving fatigue.

On the safety front, the 2010 Taurus is well equipped with standards including six air bags (including a two-row side canopy), electronic stability control, ABS, traction control, automatic high beams, rain-sensing wipers, plus a post-crash feature that unlocks all doors, flashes the emergency flashers, and sounds the horn in an event of an airbag deployment.

Safety enhancing options include a collision warning system that's part of the adaptive cruise control. When the potential for a collision is detected, the brakes are pre-charged for faster response, and a visual "heads-up" warning signal is flashed on the base of the windshield. Drivers are also warned of traffic they might not see on the highway or in parking lots by Ford's Blind Spot Information and Cross Traffic Alert systems; these use rear- and side-aiming radar. Additionally, Ford's SYNC now includes a 911 Assist enhancement that will place a call to a local emergency operator in the event of an air bag deployment incident.

The 2010 Ford Taurus also boasts a stronger body structure that makes use of high-strength boron steel. If the crash results of the 2009 Lincoln MKS are any indication, this sedan should earn full five-star ratings and a "good" rating from the IIHS.

Regardless of your take on the old Taurus, this new offering looks to be a lot of bull for the money.

You can see more photos over at our 2010 Ford Taurus page. Stay tuned for more from the 2009 Detroit auto show.