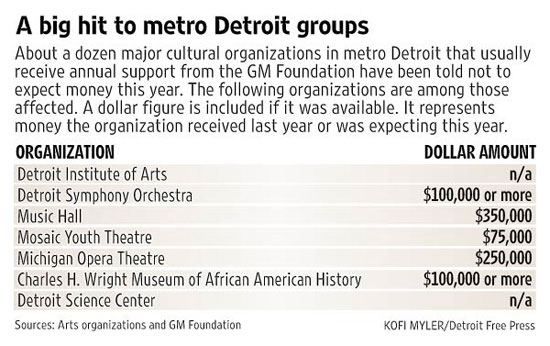 In a move that should surprise absolutely no one, the General Motors Foundation has announced significant cuts in its giving plans for 2009. That's bad news for a lot of nonprofits, but especially those based in Michigan, since much of the Foundation's money is awarded in-state.

In 2007, the Foundation awarded over $31 million to charitable organizations around the world, with $12 million going just to those in Michigan. (Total giving for 2008 was $21 million, but in-state stats aren't yet available.) However, the Foundation has contacted a number of the states' nonprofits in recent weeks and warned them not to expect any major gifts in 2009. With GM's annual contributions ranging from $10,000 to $350,000 per organization, many groups are going to see a substantial budget shortfall.

Of course, the cuts affect all sorts of nonprofits--everything from major arts orgs to social service nonprofits, impacting performances, after school programs, healthcare providers, and more. And since the Foundation's income is tied not only to GM's profits, but also the return on its investment portfolio...well, things aren't looking good anytime soon.