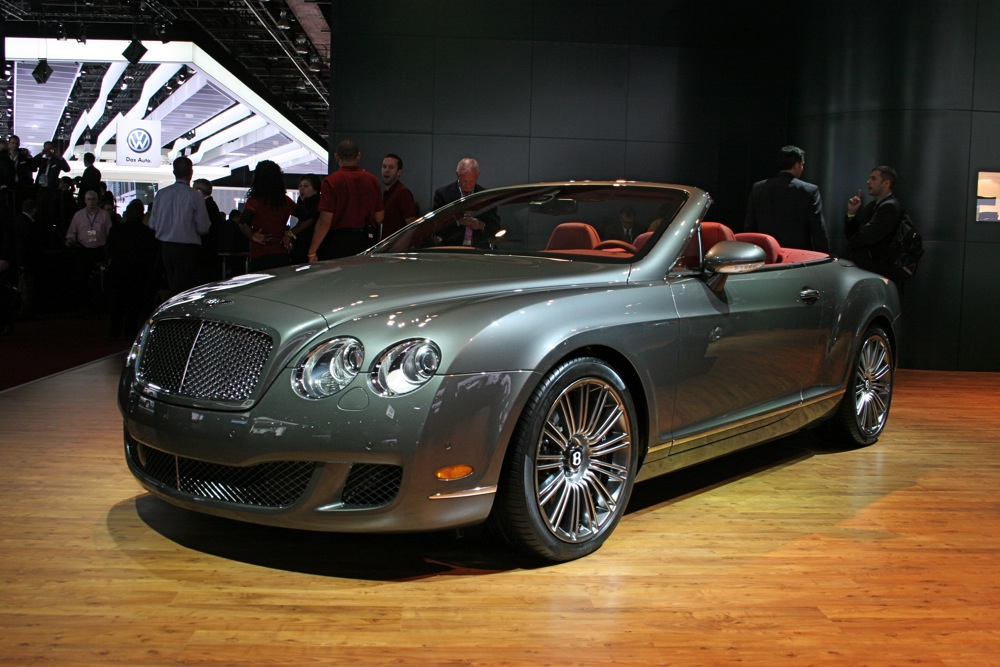 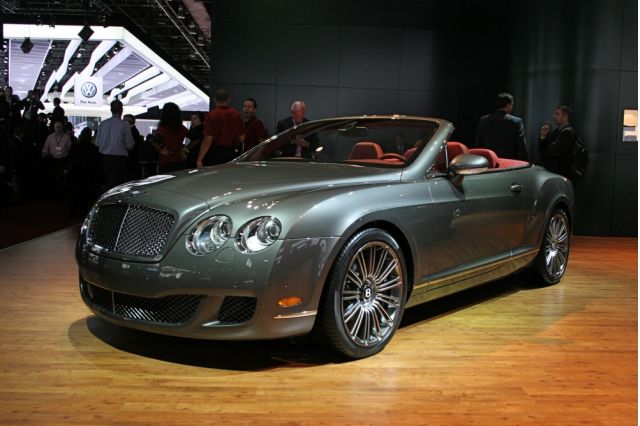 To paraphrase the cringe-worthy tag line used by a major national newspaper’s multi-media coverage a couple of years ago: “It might be cold outside, but there are plenty of hot cars inside Cobo Hall.”Well, there might not be as many “hot cars” this year at Detroit, as a number of automakers make an effort to tone it down, but Bentley has brought one that flaunts in the face of the Big Three’s modesty. The British-cum-German brand will unveil its new 200-mph GTC Speed convertible to the public at the Detroit show, but they’ve given the media a special preview well ahead of the press curtain call next Sunday.

The new GTC Speed isn’t a huge surprise to those who’ve been following Bentley though, as the model completes the stable of standard and Speed models in the Continental family. The new Speed joins the GTC convertible, which was introduced for 2007, and expands on the GT Speed and Continental Flying Spur Speed models already available.

The GTC Speed is differentiated by a dark-tinted grille, wider exhaust pipes in a twin-rifled design, and a subtle trunklid lip spoiler. It also sits a bit lower (10 mm in front, 15 mm in back), with a retuned suspension, and the electronic stability control system now has a “Dynamic” mode for enthusiastic drivers. Big 20-inch alloys with Pirelli PZero ultra-high-performance tires, besides being a nice upgrade, are especially friendly to the drop-top’s proportions.

Inside, the GTC Speed gets ‘Speed’ doorsill plates, drilled alloy pedals, a three-spoke steering wheel, and diamond-quilted hides for the seats and trim. Turned aluminum trim is available as a Speed-exclusive feature.

But what’s especially of note is that the Speed also marks the debut of some a modest mid-product-cycle refresh for the standard GTC.

Compared to the current GTC, the new GTC models get some subtle styling changes that echo those given to the Continental Flying Spur and Flying Spur Speed for 2009. Both get a grille that’s more upright and squared-off, the lower air intake has been reshaped (improving airflow), and headlamp bezels are now a bright chrome. Mechanically, both GTC models get a power steering revision that is said to yield more feedback, while in the GTC Speed the Continuous Damping Control (CDC) suspension system has also retuned for the added power and suspension changes.

The standard GTC also gets new low-friction dampers, which Bentley says will improve ride comfort. Lightweight carbon-ceramic brakes are a new option—Bentley claims that they are the largest passenger-car brakes in the world—as is an adaptive cruise control system.

As before, the GTC models come as a 2+2, with cozy, enveloping front seats, a back seat that can accommodate adults for short stints, and the triple-layer soft top folds flat into the down position in 25 seconds.

The ZF six-speed automatic transmission is carried over, with both a Sport mode or manual gear selection via the shift lever of steering-wheel paddles, but the twin-turbo ‘W12’ twelve-cylinder engine has been given a host of incremental efficiency improvements, including a new engine management system, that altogether raise power to 600 bhp and an eyebrow-raising 553 pound-feet of torque at only 1700 rpm—9 percent more power and 15 percent more torque than the GTC. Peak torque is delivered from 1700 rpm all the way up to 5600 rpm, assuring, as TheCarConnection.com has experienced, an effortless and deceptively quick way of getting past the speed limit.

The new GTC Speed weighs nearly 5500 pounds, but the engine assures that the hefty convertible will outpace most lean sports cars—at least until the switchbacks turn really tight. Bentley says that the GTC Speed can get to 60 mph in 4.5 seconds and 100 mph in just 10.6 seconds. It will reach 200 mph with the roof up, or a 195 mph with the roof down—if you dare. 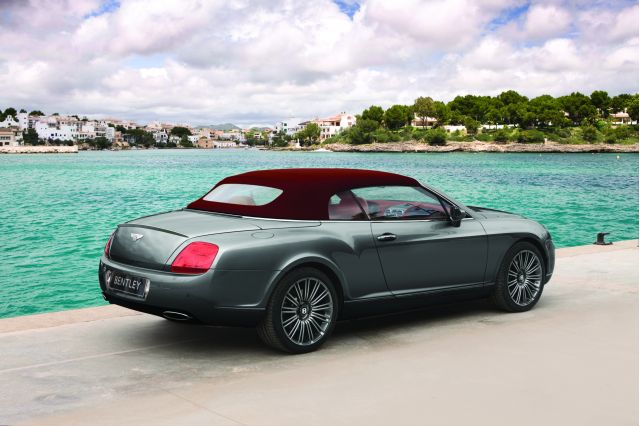 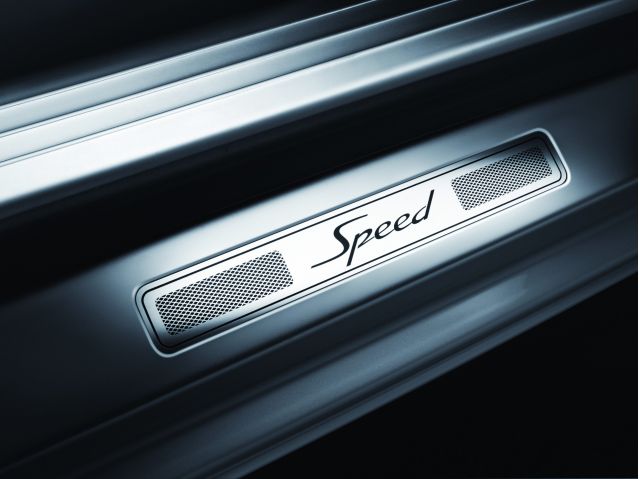 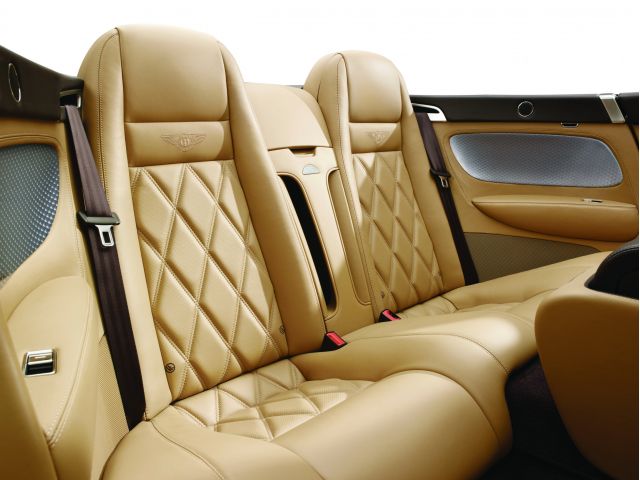 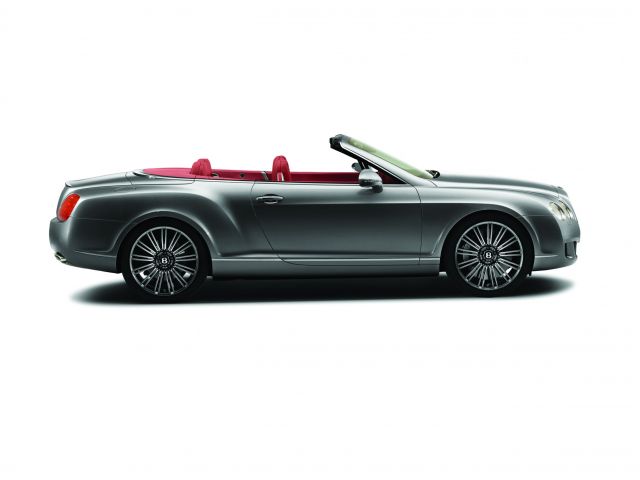