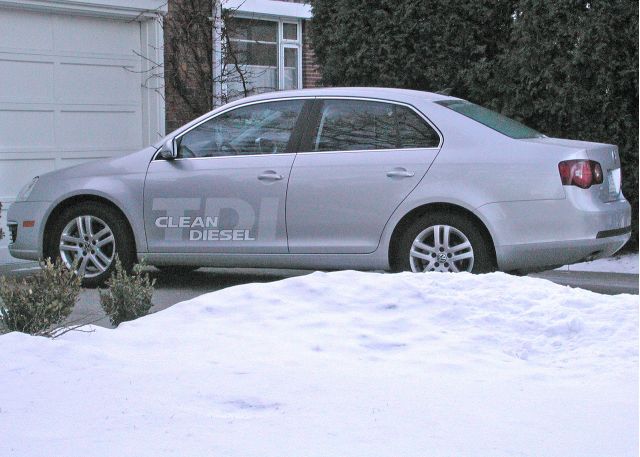 As I get a little older and live through more Michigan-induced financial hardship, I have matured enough to understand the true joy of driving a vehicle that is both practical and competent. Not that I wouldn't love to have a Lamborghini Gallardo land in my driveway with the insurance paid … but I live in the real world … and if I needed to buy a car today, it might very well be the 2009 Volkswagen Jetta TDI.

You can read our opinion on the 2009 Volkswagen Jetta here, but there are a few points about driving the car that didn't make it into our initial review.

Unlike inexpensive cars of yore that provided great economy wrapped in a body sourced from a sardine cannery, the Jetta delivers a driving experience significantly more sophisticated than its $23,090 price point would suggest. The 2.0-liter direct-injection turbo diesel thrums along smoothly and quietly, at some RPMs sounding exactly like a Subaru boxer engine. The Jetta TDI's numbers are 30 city, 41 highway, figures that other journalists have bettered (our average was nearly 36 mpg for mostly urban driving over snow-clogged roads). Its performance is far from anemic thanks to the 236-lb-ft of torque, but it takes some time to get use to the narrow rev band (red line is 4,500 rpm), so making 4,000 rpm gear changes—for the driver used to gasoline engines—feels like you're short-shifting the six-speed manual all the time. And even when the mercury was solidly in the single digits, the diesel started quickly and ran without a hint stink or soot.

Beyond the sophistication, economy and power of the 2009 Volkswagen Jetta TDI, we also like that it provides everything drivers need and none of the stuff drivers don't. Regarding the former, necessary features in the categories of safety and convenience are all there. But more importantly, it's in the latter grouping where the Jetta makes so much sense. Our test car was happily lacking a self-dimming rearview mirror, rear-park assist, lane-departure warning systems, massaging seats, a nav system, self-folding rear-seat head rests, and power rear-window sun shades. All of these things add cost but no genuine utility … or the utility added can be found at lower price points (nav units, in particular).

We are currently well into a period where it's acceptable and perhaps even savvy to be economically conservative. The Jetta TDI is a perfect car for this reality.