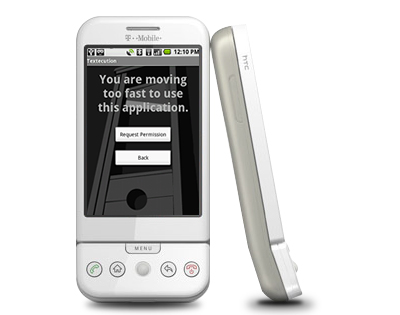 I admit it: I've sent text messages while driving. But then, chances are pretty good that you have, too.

It's a really stupid thing to do--far worse than jabbering on a cell while driving. My state and others have outlawed it, though no one's come to any consensus on how to enforce such regulations.

Enter tech firm eLYK Innovation and its new application, Textecution. The program taps into the GPS system that's built into the new G1 from T-Mobile (also known as the "Google Phone"). When the phone is moving faster than 10 miles per hour, Textecution assumes that you're in a car and disables your ability to send text messages until you slow down. Nifty, huh?

Of course, it's not a perfect solution to the problem. When active, it'll also prevent you from texting when you're just a passenger in a car--or a bus, or a train, or a roller coaster. And according to our friends at TechCrunch, it's fairly easy for teens to override, which is bad, since they're the application's primary target. Still, for parents worried about their kids' safety, it's far better than nothing.

Currently, Textecution costs $9.95 and is only available for Google's Android operating system. iPhone users: you'll just have to use that thing we in the business call a brain. --Richard Read