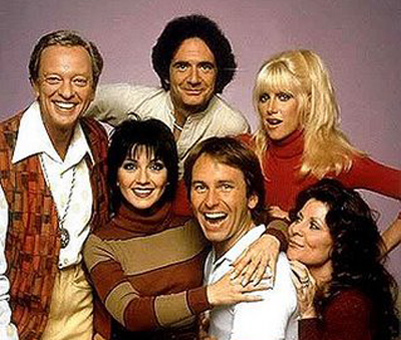 It's deja vu all over again! One week ago, Chrysler and its parent company, Cerberus Capital Management LP, called off merger talks with GM, claiming that a merger would be too much to handle given everything else that's going down. Today, however, comes word from the Wall Street Journal that Chrysler came back--they just couldn't stay away. But of course, there's also word from GM that such rumors are, you know, totally bogus. And now Treasury Secretary Henry Paulson is getting up in everybody's business like the Car Czar he pretty much wants to be.

This is really confusing, people, so to make sense of it, I'm going to explain it like an episode of "Three's Company." Those of you who are too young to remember, take notes.

The lights come up on a tasteful, Detroit-area apartment. Chrissy (aka Chrysler) is having trouble paying the rent. Janet (aka GM) is also having some problems of the pocketbook variety. They're sitting on the sofa talking about their problems, drinking tea or possibly Tab, the beautiful drink. Chrissy and Janet are friendly enough, but there's tension in the air--not the good kind.

Enter Jack (aka Cerberus Capital Management LP). Jack's somewhat emotionally retarded, and on a personal level, he doesn't care much about the two women in his life; he just wants to be happy. He's got some kind of kooky hypnotic control over Chrissy, but not over her wallet. On the other hand, he totally owns Janet's pocketbook, but she's ambivalent toward him personally.

Jack listens to Chrissy and Janet go on and on and on, and eventually he hatches a crazy scheme: he thinks that he can solve everyone's problems by having, um, "relations" with both women. In fact, as it turns out, Jack is a closet polygamist, who's contemplating the idea of marrying both Chrissy and Janet and combining everyone's money into one big bank account! Jack trips clumsily over the sofa and slides between the two women to start persuading them to go along with the plan.

Enter Mr. Furley (aka Henry Paulson), who's taking correspondence courses to become a marriage counselor. He always thought Jack was gay, so he's a little shocked to see Jack nestled comfortably between Janet and Chrissy, but whatever--it's a whole new world, right? All four head over to the Regal Beagle, and after a few beers and some darts, Jack reveals his plan. Well, everyone is thrown into a tizzy. Chrissy feels hurt and kinda jealous. Janet is appalled but secretly turned on. And Mr. Furley feels really old and unsure and scared. Everyone starts shouting and Jack stumbles over a few tables, and the episode ends as Larry (Ford) walks in, sees the chaos, and exits without saying much.

Which is to say: everything's vaguely tragic and nothing's decided, and there are about a bejillion different ways this could go and none of them will end with a laugh track. Stay tuned.... -- Richard Read