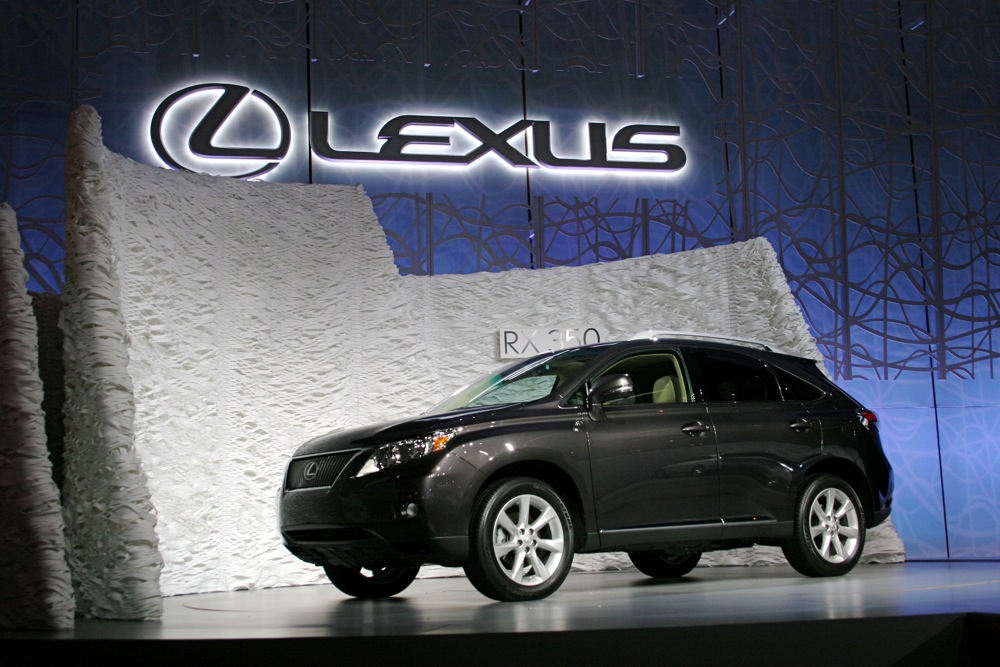 The newest editions of the best-selling Lexuses on the planet have arrived--and for the 2010 Lexus RX 350 and hybrid 2010 Lexus RX 450h, the buzzwords are "don't rock the boat."
The new crossover's shape is clearly related to the outgoing model, though the faster rear pillar and more creased fenders give the new RX a little sharper visual appeal. It's inside where the more radical changes have taken place; Toyota's stylists are on a mission to chop their center consoles into visual pieces, and the RX doesn't escape the treatment, with a Tundra-like curve that separates driving controls in metallic trim from the passenger-side plastic trim. The hybrid RX has some distinctive touches like a new grille and front bumper, blue-tinted headlamps, blue-trimmed Lexus logos and an option for LED headlights. 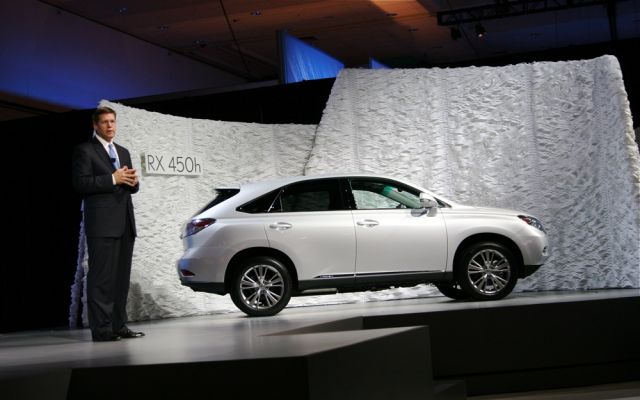 Performance is generated by a V-6 engine in either version. The gas-only RX 350 sports a 3.5-liter V-6 with 275 horsepower, teamed to a six-speed automatic transmission and a choice of front- or all-wheel drive, the latter of which has an adaptive torque split for rapidly changing driving conditions. The hybrid RX 450h, meanwhile, adds the Lexus Hybrid Drive system to the mix, with batteries and motors teaming with the V-6 to produce 295 horsepower, up 27 hp from today's RX hybrid. The hybrid's AWD system is part-time and electronically driven, and it's capable of using regenerative braking to recharge its batteries.

Eighteen-inch wheels are standard equipment, and 19-inchers are available.

Interior room is improved, at least in back where Lexus promises 5 percent more cargo room thanks to a redesigned suspension. The five-seat RX still won't offer a third-row seat, though.

Safety equipment will include 10 airbags in all, including curtain airbags and side bags for the rear seats, stability and traction control on all models. A Pre-Collision System will use radar sensors to detect a possible impact, then to ready the brakes and seatbelts for an imminent crash. Adaptive lighting and automatic high beams are also offered.

The most controversial feature in the new RX is likely to be the available "Remote Touch" controller, which Lexus compares openly to the iDrive system from BMW and Audi's MMI. The controller is shaped more ergonomically than those click-wheel setups, and Lexus says it feels natural like a computer mouse. It can be used to control the navigation system--which is mounted farther away on the dash than in prior versions for better visibility. A head-up display is also available to cut down driving distraction even more.

Other options will include a side-view monitor, a Mark Levinson sound system, a rear-seat entertainment system, radar cruise control, and a sport-minded suspension.