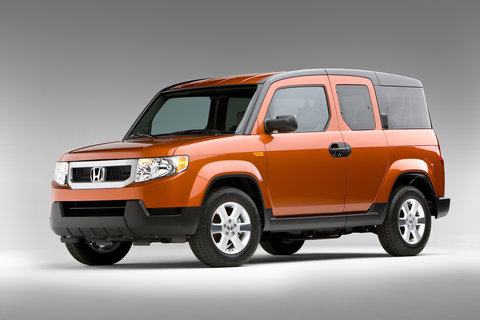 The 2009 Honda Element gets a subtle restyling with a new grille and a new interior, along with a sprinkling of technology.

The chunky two-door with the Target-inspired look and washable plastic interior (on some versions) also gets a price boost that puts the base version over $20,000. When the Element bowed in 2003, base versions stickered just above $16,000.

The Element still is offered in three trim levels: LX, EX and SC. All-wheel drive is an option, and a manual transmission is still offered, though it's down to just two possible trim versions, and not available at all on the bargain LX. A five-speed automatic is standard on most versions, and the 2.4-liter four-cylinder remains the sole engine. The Element gets as much as 25 mpg on the highway, and as little as 18 mpg in the city, depending on the drivetrain.

The EX and SC versions get the most interesting updates, chief among them a navigation system with voice activation and on automatic models, a rearview camera. USB connectivity is also offered on those versions. EX versions also get a convertible center console with a removable cooler inside; the EX and SC add in a modular storage system that rides on rails, like that in the Ford F-150.