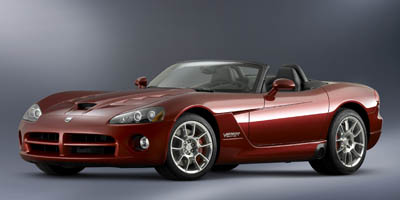 Chrysler, considering the sale of all "non-earning assets" to stay afloat and help finance deals like the proposed merger with General Motors, today said it has received multiple bids on its Dodge Viper sportscar line. We first reported on this possibility in August. Automotive News, via Reuters, claim that no further bids are likely to be considered for the low-volume, halo vehicle that's been produced by Chrysler since 1992. Chrysler did not disclose exactly how many bids have been made for the brand.

This possibility is announced, says Automotive News, along with Chrysler's admission it plans to cut roughly 4,300 white-collar jobs in further attempts to "reduce capital expenditures." Nice to hear that not only blue-collar workers are being forced to bear the brunt of cutbacks. But nonetheless horrible to hear of seeming non-stop threats to the American workforce.

Who might buy the Viper brand? Perhaps a maker of staid, sensible transportation who needs a boost to its performance image? With nearly all automakers cutting back and trimming the fat to weather a tough market, could it be that a private investor is be among the bidders (how about eight-plus liters of a limited-volume Kerkorian GT)?

Bad market news abounds right now, and the AP wire comments that markets around the world are plummeting today amid sharply lowered oil prices and even the value of gold--long considered safe even in times of instability--is taking a big hit.--Colin Mathews