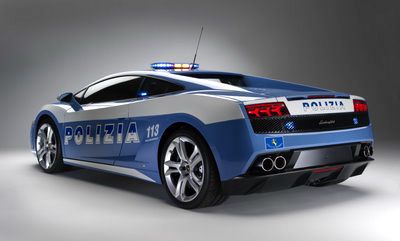 Forget KITT. If you want to chase down some bad guys while looking truly bad-ass, strap yourself into Lamborghini's new Gallardo LP560-4 Polizia. Today, an exclusive ceremony was conducted in the Viminale Palace during which Automobili Lamborghini S.p.A. donated this, its newest police car, to the head of the Italian State Police, Prefect Antonio Manganelli.

The Gallardo had already been used by Italian police since 2004. But the brand-new LP560-4 platform now allows speeds of up to 203 mph; this in order "to continue accident and crime prevention to sustain security on the Italian roads," according to the Italian automaker. The new perp pursuer will first see service with the Lazio Highway Police Department.

Lamborghini claim that current Gallardo duty ensures these supercars have enjoyed very unsupercar-like reliability. Rome's first-gen Gallardo service vehicle has accrued almost 87,000 miles of patrol duty on motorways as well as emergency medical transport without a hitch, and a blue-and-white Gallardo serving B0logna since '05 has also needed nothing more than regular servicing.

Lamborghini claim "the clearly effective deterrent offered by the presence and visibility of a Lamborghini on the highway," and we bet NBC character Michael Traceur and KITT, his Ford Ford Shelby GT 500 KR Mustang, would be summarily blown away by the Italian stallion. Comparison test, anyone?--Colin Mathews